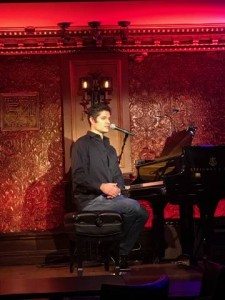 The Tom Kitt Band will play February 9 and 11 at Feinstein's/54 Below. We spoke with Kitt about how he selected songs for his upcoming show and the differences between composing musicals and writing for his band.

My father’s an economist, and he’s one of the most creative people I know, so I’ve always wanted to ask you how does one go from economics to creating art?

(Laughs) My father’s an economist too, and he’s also one of the most artistic people, as knowledgeable about music and art as anyone I’ve ever met. I was really glad to major in Economics in school, at the end of the day I found it to be a study of human action, of choices, and how you measure your life. People look at the financial aspects and know how Wall Street works, but what I loved was the human aspect of it. If/Then was born out of that experience because looking at someone’s story and trying to measure how they make their decisions, and how what they do affects other people’s lives. To exercise my mind, look around me and see other people’s experiences and how it affects what we do, feeds into getting inside of people and being a writer.

How do you go about selecting songs for a show like this?

My band formed in the mid '90s, we were playing at places like Mercury Lounge and we really wanted to get a record deal. I wanted to follow in the footsteps of my idols Billy Joel, Elton John and the Beatles. I wrote a number of songs at that time about my life, and many of them made it into musicals like Next to Normal. Brian Yorkey and I are also writing new songs for the band, so the setlist is made from songs I used to play, songs from musicals. There’s a Tom Kitt Band sound, and I hope the night will be a celebration of that.

Absolutely, because the band is a piano-based U2-meets-Dave-Matthews-meets-Billy-Joel-and-Ben-Folds, but I also love soaring, melodic ballads. When I’m working in theatre, especially if it’s a bigger orchestra, or a style with different tonality, like the piece I’m writing now with James Lapine and Michael Korie based on the usage of LSD amongst very famous figures back in the 1950s, so the score for that isn’t something I’d put on The Tom Kitt Band. As a writer all the things feed into what you wanna say, so there are things from that world I make take into something else without even knowing. The key is to keep challenging yourself.