Adam Kantor and Betsy Wolfe will headline Women of Notes, a celebration of female composers from Dolly Parton to Mary Rodgers, put together by The New York Pops. Kantor is best known for his work in the recent revival of Fiddler on the Roof, Next to Normal and his devastating turn as Jamie in the 2013 revival of The Last Five Years (which had Wolfe play Cathy). Audiences can now see him in the Broadway transfer of The Band’s Visit where he plays an unlikely romantic hero trapped in a limbo of longing. We spoke to Kantor about getting to sing with the Pops and why celebrating women is more important than ever.

What are you looking forward to the most about getting to sing with The New York Pops at Carnegie Hall?

When you have a chance to work on your own setlist you probably use the opportunity to try out composers you’ve never done before. Has this been the case and if so, who have been some of them?

Totally, most of the songs I’m singing I’d never sung before which is particularly terrifying (laughs) but yes, I’ve been researching and learning a lot about luminaries like Betty Comden, Dorothy Fields, all the way to today, people whose work I’ve been a fan of and I’m getting to know even more like a young composer named Shaina Taub who is writing glorious music. I’m hoping we can honor those who’ve found great success, but also uplift those who are up and coming. It’s been a great learning experience, I’ve realized how few opportunities have been afforded to women. I don’t know what the exact percentage is but we can see how fewer women have been asked to write a Broadway show compared to men. It feels time for that to change, so I’m excited to shed light on these incredible women.

You were in Fiddler on the Roof, which became an allegory for the refugee crisis, now you’re in The Band’s Visit which focuses on problems in the Middle East, and I wonder if given the political climate we’re in, has being a part of shows that have something to say about the world and highlight diversity, become more important to you?

Yes, thank you for saying that. I think you’re right, I’m drawn to shows that have something to say, shows with messages that are prescient and precious. Pulling out and lifting up the voices of those who are marginalized and less heard is one of the most imperative, crucial and meaningful things that I can do as an artist. The more I work in this industry, and the more I’m lucky to choose what I can work on, I will always choose projects where I can lift the voices of those who need to be heard.

You’re playing the Telephone Guy in The Band’s Visit…

Speaking of a marginalized voice (laughs).

...this show is so great, did you watch the film or did you stay away from it in order to create your role from scratch? 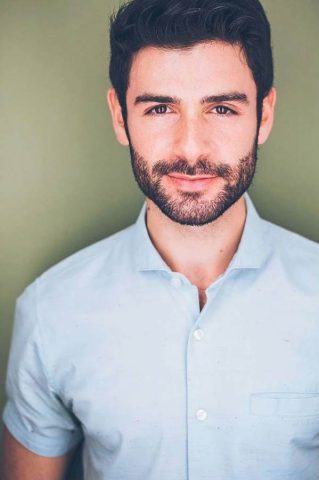 I watched the movie years ago when I did a reading of the show in 2014, when Hal Prince was going to direct. I watched the movie before the table read, it’s a beautiful movie, but I haven’t gone back to it because I don’t want to go into imitation land. The same goes for music, there’s only so much I’ll listen to when it comes to the particular recording of a song, before I step away from that and kind of bring my own authenticity to it. Audiences can smell imitation a mile away, they’re only moved by honesty.

Do you play any instruments and has doing The Band’s Visit made you want to take up one?

I play a little bit of piano, but I’m surrounded in the show by the most un-freaking-believable musicians. I don’t know that I can ever aspire to be at their level of musicianship, I’d like to at least improve my piano skills. Maybe I’d get to tinker a bit with the keys at Carnegie Hall.

You’re one year away from the fifth anniversary of your own The Last Five Years, what’s it like to reunite with Betsy Wolfe?

For us it doesn’t necessarily feel like a crazy reunification because it’s almost as if we hadn’t left each other. Since doing The Last Five Years in New York, we’ve done a bunch of concerts together all over the place, from Las Vegas, to Miami, Boston and San Francisco, so I think our relationship as artists, friends and collaborators is growing deeper and deeper, it feels like we’re ready for Carnegie Hall together as a unit.

After doing that show have you discovered you have as much Cathy in you as you do Jamie?

Of course, we’ve talked about this before, Betsy and I have elements of each character. It’s a show we both love and we’ll be coming back to. We won’t be singing from it at Carnegie Hall because it was written by a man, but we’re talking about future dates for Last Five Years dates and other stuff.

To wrap up, what are some songs and characters by Stephen Sondheim that you’re dying to sing and play?

I’d love to do Bobby in Company it’s one of my favorite shows and roles of all time. I did it in college and George Furth who wrote the book came to see it, it was so beautiful to meet him, he was very encouraging to me and seemed to be very moved by our production. I’d love to revisit the show as an adult who’s around Bobby’s age, now that I have a deeper experience of knowing what it’s like to be single but ready for a relationship in New York City. Sondheim is a god, I’d love to do all his shows. I’d love to meet him too. Sweeney Todd is one of my favorite pieces of theatre too.

For more information and tickets to Women of Notes click here.