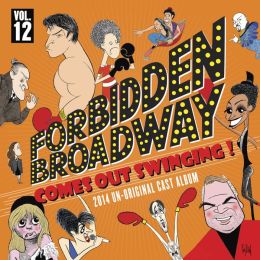 Forbidden Broadway is back with another lampoon of this year in Broadway. The show is something like the enchanted mirror of Snow White's stepmother. This year, it asks, what is the future of Broadway? And what a dark reflection it casts back. The theme of this album is the corporate greed and creative death that ran rampant this season. And it's true. What did producers give us this year? A slightly updated Les Miz, and, as Forbidden Broadway puts it, the "revival of the revival of the revival of Cabaret" starring Alan Cummings.

There were moments in Forbidden Broadway that made me laugh. One highlight from the show was "Let It Blow," a send-off on little girls trying to mimic Idina Menzel's vocal prowess, and sucking. "Don't let them try to copy me. Only I can wail that loud high C." Anyone who's had to sit through a middle school karaoke with girls screeching tunes from Wicked will appreciate this number. (And of course, they threw in the obligatory "Adele Dazeem" reference). Other funny bits in the show included a farewell song to the turntable in Les Miz and the introduction to screens, and a send-up of Bullets Over Broadway.

But if the Broadway season was a little tiresome this year, so is the cast album to Forbidden Broadway: Comes Out Swinging. There's nothing much new on Broadway this year, and there's not much new to parody either. Comes Out Swinging! revisits Les Miz and Cabaret with diminishing returns -- but who can blame them for not finding new jokes about these old, old, musicals? Instead, the show riffs on the tiredness of Broadway itself. Their segment on Cabaret, for example, recycles a few lines from previous years ("leave your hopes of being entertained outside"). But they keep the numbers relevant by rewriting them to be more about how overdone the show is: "What good is sitting through something that's new? New shows don't always pay. So they do Cabaret, old chum. Let's bring back Cabaret."

The satire may be a little less overtly funny than in years past, but Forbidden Broadway does hit home the point that unless something changes, Broadway is going to keep churning out the same material over and over. Risk-taking is dead, or near-dead. The show ends with corporate fat cats dancing in a parody of Cabaret's "Tomorrow Belongs to Me," exulting the money that comes when you cash in on tired-but-true franchises and revivals. This year's album is particularly poignant. If you left Rocky or Aladdin or Les Miz gnashing your teeth, then pick up a copy of Forbidden Broadway: Comes Out Swinging! and shed a sympathetic tear. Tomorrow belongs to them.

What started as a small cabaret performance in 1982 is now a theatrical institution loved by critics and audience alike.  Forbidden Broadway has won numerous awards including a Tony in 2006 and continues to be one of the most anticipated shows of every season. Like every great Broadway musical, fans want the album to sing along with and Forbidden Broadway Comes Out Swinging doesn’t disappoint.  (Read our album review here.)  Stagebuddy caught up with writer Gerard Alessandrini after their CD Release Signing to talk about Forbidden Broadway’s creation, the effects of parodies, and why it’s fun to spoof Broadway celebrities.   https://youtu.be/RVKYA23sEdU