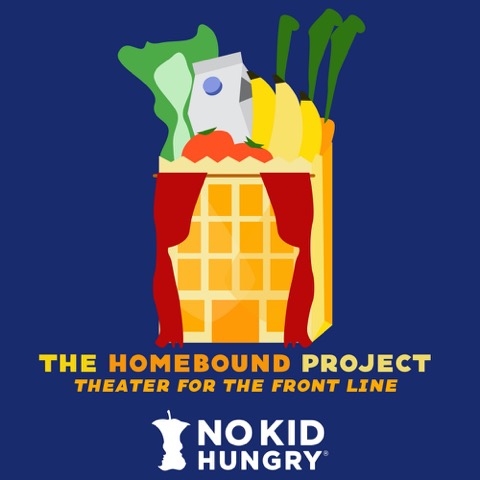 The statistics are staggering and heartbreaking. Before the COVID-19 pandemic, 1 out of 7 children was food-deprived. Now it is estimated that 1 out of 4 children is going hungry. With schools closed, an estimated 850,000 NYC kids are missing meals every day. Over the entire country, that means close to 33 million children are going hungry. These numbers are shocking- No child should go hungry!

Founded by playwright Catya McMullen and director Jenna Worsham, The Homebound Project has enlisted acclaimed writers and performers to use their time sheltering at home to good use. The end result is Edition 1 - ten recorded monologues, all using the prompt “home.” There will be three editions in all, each of which will run for only 4 days and be centered around a theme with all profits going to “No Kid Hungry.”

In the opening scene, “Diversions,” a work by C.A. Johnson, Alison Pill plays a wife who needs a break, a diversion, from daily routines. As a young woman she was advised by her own mother that “a woman needs her diversions, at least one, most likely three.” Now being together with the family and having little escape, she understands her mother’s wisdom. We all need our diversions. For many of us, it used to be going to the theater. Alison’s character takes up the ukulele.

The second skit also reminds us that we are staying at home and missing our loved ones. In “Building Models” by Ren Dara Santiago, a young man, played by Glenn Davis ‘zooms’ his father. The older man can’t connect the audio, so Davis must do all the talking. He suggests that his dad ‘just prop me up somewhere.”

My favorite of the ten was “Homesick” by Qui Nguyen as performed by Raymond Lee. Although some of the lines were comical, the message was poignant. Lee does a sort of rap about what home is ending with “Home ain’t just me. It includes you. “

“The Jessicas” by Eliza Clark is a departure from the other scenes in that it is set in the future. Marin Ireland instructs a group who is about to board a sleeping travel pod for a 10- year trip. Despite the futuristic setting, much of the dialogue rings true, especially when she notes that “you will miss some of the ordinary sensations of ordinary life.” Jessica talks about the things that people take for granted.

Edition I is composed of ten segments and the acting and writing are uneven, but it’s all a matter of taste. Some really resonated for me while others didn’t interest me as much, either because of presentation or acting. A colleague and I shared notes afterwards, and, interestingly, the scenes she preferred were the ones that I found dull.

Midway through, the program stops for a 5-minute intermission, suggesting that the viewer do whatever he or she would normally do during a regular theater visit. This theater initiative has already planned Editions II and III.
Future performers include Betty Gilpin, Mary Louise Parker and Zachary Quinto in works by John Guare, Anne Washburn and Adam Bock among others

While we shelter at home, we can watch cable, network TV and a myriad of shows and movies streaming online, but The Homebound Project offers so much more. It’s an opportunity to help hungry children while experiencing new theater from the comfort of our homes.

For a minimum donation of $10, less than the cost of a ticket at the local movie theater, it’s a chance for us to help others while enjoying new theater. It can’t get much better than that.

NY PopsUp! Theater coming back to New York in Apr...
Performers and Crew are Helping Out in the Fight a...
A Letter To Harvey Milk
John Cullum: An Accidental Star