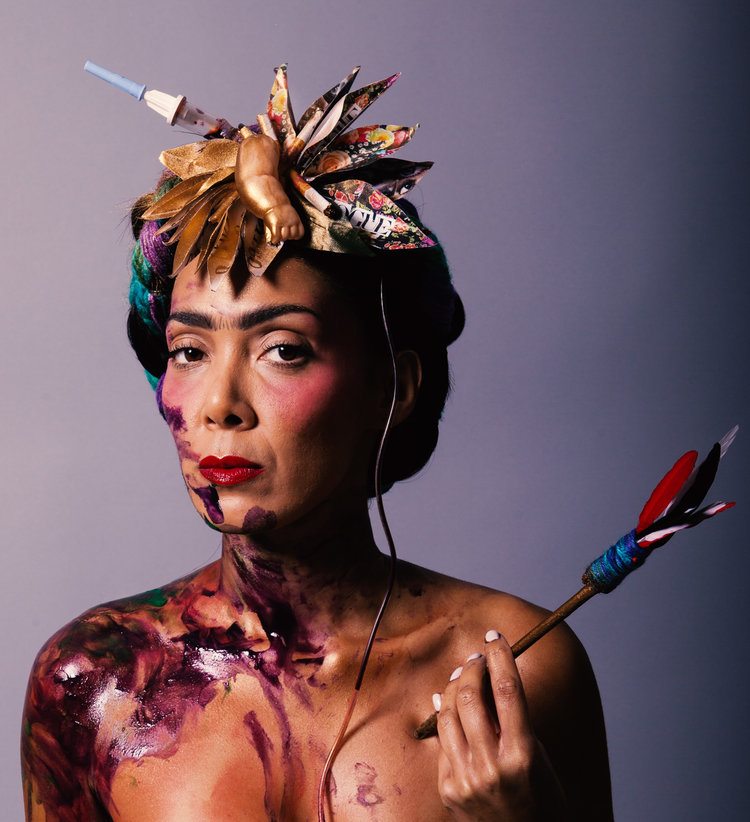 In Fragmented Frida, actress/writer Andrea Dantas takes on one of the most iconic artists of the twentieth century to tell a story about how someone who was dealt all the wrong cards, managed to win the game of life. The play runs from April 11-16 at BAM, and we spoke to Dantas about what inspired her to create the show, why Frida remains such an essential part of her life, and the importance of creating opportunities for women.

Why did you want to write a show about Frida Kahlo?

I’ve always been fascinated by her resilience and how uncompromising she was. The real reason why I did the show was that I didn’t get a job I really wanted, I’m a flamenco dancer and auditioned for Madonna’s Rebel Heart Tour, but didn’t get it so I went home and asked myself what I wanted to do. Then I heard a voice saying “Frida” and now we’re here.

Wow, that’s so interesting because Madonna herself is a huge Frida fan.

I know! I actually started to look for a play and could only find one, but it didn’t really move me, so I knew I had to create something of my own, to tell the story I wanted to tell.

Why do you think Frida casts such a spell on so many creative women?

Because she was so ahead of her time, you have a Mexican woman in a very conservative country, she was half Jewish, she was bisexual, divorced, a communist...all of these things were unheard of in the 30s. When they amputated her leg the first thing she did was get a prosthetic made which she decorated so people could see why she was different. We’re all in awe of what she did.

She was also surrounded by incredible artists, she was like a magnet. When you hear this message from the universe telling you to write a show about her how did you choose what to focus on?

First I spent months researching her life, I’ve always been a fan but I didn’t know everything about her life. I didn’t want to rush the process and also knew I couldn’t have a four hour play, so I sat and asked myself what about Frida fascinated me the most. It was her resilience, this is a journey that begins when she was 12 and goes all the way to when she became an icon. It’s not about Diego, or surrealism, but look at how the underdog became an icon.

It’s beautiful to see the show arrive at a moment when we need to be reminded of the power of women, we have a government that is trying to take away women’s rights, so can you talk about why the show is important in this climate?

The craziest thing is when I was done writing the play I had an intuition about a woman I wanted to direct the play, I got detoured and hired a male director instead, we had a little setback and the same woman I had wanted originally took over. Everybody involved in the show is a woman, it’s great to see everybody fighting for our rights in things like the Women’s March, so this play is essential. I want people to look at this woman who was put on this Earth with all the worst cards and yet she succeeded. She was powerful, we are creative, we are still the only humans able to create life, so right now the play resonates in how we shouldn’t think less of who we are, we can be like Frida too.

In an interview you did you mentioned living in Australia and how you survived eating cans of beans, but you were so happy because you were pursuing what you loved. This idea of resilience is clearly important in your own experience, before Frida who were the women who inspired you?

My mother. She raised me and my brother by herself, I don’t come from a perfect family so I realized from an early age that if I wanted something nobody would give it to me. I have the kind of temperament that makes me want to reach my full potential, after I had enough of auditioning to play the Latina stereotype I realized I needed to make my own opportunities happen. 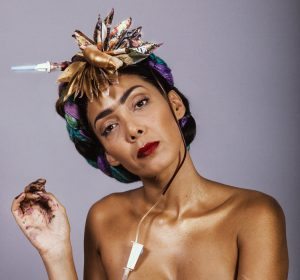 You also teach which means you’re creating opportunities for other women.

Teaching is the most important thing to me, most of my female students come to me with a lack of confidence, not in their past but their craft, and they tell me I’m one of the first people who tell them they can do this. In the fall, my next project is to start my own theatre company with some of my students, and it’s going to be only women because we get things done.

Going back to Frida, I find her work to be violent and peaceful at the same time, were there any specific pieces that you used to meditate or write?

There is a painting called “The Little Deer” which is her beautiful face with diamond rings and she’s a deer who’s full of arrows on her body, to me that’s so indicative of her character. Because of her physical condition she was soft, she moved slowly, so the turmoil was all internal and she put this on the canvas, but the nuances, sensitivity and divine quality come from her own mannerisms and how she moved in her life with her body. That contrast is just wow, her strokes were so delicate, she’s no Pollock or Kandinsky, she was delicate.

If you were able to sit down with Frida what would you want to tell her?

First of all I would get a lot of tequila, I’d have her make me some food because she was an extraordinary cook, and I would want to ask her for all the gossip about Picasso, Rockefeller, Dalí, I’d want to hear all the dirt on everyone. I’d love to gossip with her (laughs).

For tickets and more information on Fragmented Frida click here.