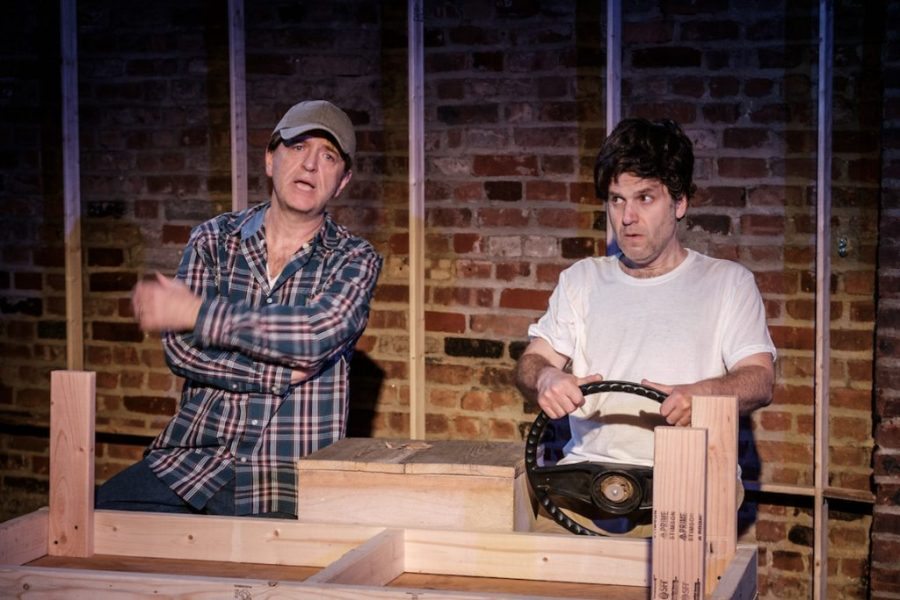 Traditions bind a family together, but they can also tear generations apart. The Charleses, currently playing at the Brick Theater, explores the generational frictions and commonalities in father-son relationships. We talked to Meghan Finn about her approach to directing this familial play with an experimental twist.

What drew you to this play?

I was really excited by the script. I think it’s a challenging story, so to work on it was really exciting. It received an honorable mention from the Relentless Award this year, so even on the page it’s a pretty exciting script. But it does present challenges that I was excited to really dig into. That was what drew me to it initially, was just that here are a lot of challenges to it, but also that it was sort of structurally experimental, but also poignant and very familiar. Carl [Holder, the playwright] kind of brings his experience as a performer to the challenge of the script. There’s so many worlds, and it’s very episodic with tight, small scenes. Part of the fun of the show is watching the actors navigate that, and how they change throughout the play.

The beginning of the play is pretty conventional in terms of storytelling, but then it gets into a sort of time jump. How did you approach that point in the play?

That’s what’s fun about it. I think what we did was really commit to the moment. At the top of the play, there are these leaps that we ask the audience to make, because we have to. Like a grown man playing a baby. In the beginning, it’s those moments of abstraction where the audience goes, “Okay, what am I watching? Am I watching a show about a man who has a grown man as a child or something?” And then as the play goes on you realize it’s a more conventional narrative of a father and son, and then his son. Aesthetically, it’s kind of heightened, but we tried to find the simple and familiar moments to give the audience a very patterned sense of the relationship between the first father and son, and then challenge that with the second father and son. So we have the leaps they take in the beginning, they kind of relax into “Okay, I know what I’m watching now,” and then the idea is to really extrapolate on that. We kind of turn it into an equation. If A and B are true, then let’s jump to the future and see what that would then create. With those, we really tried it in the room in a bunch of ways and tried to find the tone that works for those scenes. What came out was my impulse of a more surreal space. I think they’re written to be performed in such a way that it could be a little more vaudevillian, or clownish, and there are tonally clownish moments in there, but for the most part we took on this surreal space.

The lighting design was really unique and added a lot to the play. Can you shed some light (pun very much intended) on the purpose behind that?

One thing that I’m really proud of with the show is that it introduces people to the Brick Theater in ways they’ve never ever seen it before. I think that’s a testament of the design team’s work. They’re incredible, and they really went after the play, and I’m really proud of how it all looked. In particular with the lighting, this is my third time working with Sarah [Johnson, the lighting designer], and we really got after trying to use the set to create total shifts in location. She was really successful with the design. One thing that I love to do is have a design workshop in advance of the rehearsal, and we come in and sit with the design team and see the play in three dimensions. A play like this in particular, where you have scenes that are really hard to see on the page, but immediately when you get actors in the space performing them, you understand them. I really like to do that before I even get into rehearsal so we’re all thinking about the play in three dimensions. I think the design is successful because we did spend that time. The designers are all in the room and we’re all hashing it out. It’s very satisfying for the communion between set design and light design, which I think is really exciting. That show’s created something that I’ve never seen before. Sarah came up with the concept of using the really simple work light as a projector, and I came up with the idea to use it in the scene with the doctor. I’m really proud of it. I think there’s ways that there’s very simple shifts in light in the show, and so much shifts in terms of where we are in the story, so I think it does a really nice job.

How did you connect the principle themes of ancestry and technology in the play?

I think that Carl has a less nihilistic view of the relationship with technology, although it kind of implied in the text with the way the play ends, but it does have a lot of hope in it. I have a kind of more Luddite relationship with technology. I think that is present in the play. What’s super fun is that we track time with telephones and cars, kind of, we track time with small nuanced moments of technology evolving that maybe somebody watching the play wouldn’t even necessarily notice, which I like. We’re not trying to beat people over the head with it. But as time passes, there’s small gestures. That is in the script, to try to keep us understanding that long periods of time are passing. I think it’s effective. I think what’s nice about it is that we end up thinking about technology without detracting from what the show is really about.