In honor of Halloween and Dia de los Muertos, FRIGID New York and Something From Abroad present the first-ever Days of the Dead Festival. Running October 20 through November 1 at The Kraine Theater and UNDER St. Marks, the festival's 13 shows include a vampire burlesque, a Day of the Dead cabaret, a one-man Poe performance, and much, much more. Ahead of this diverse lineup of spooky, fun, and nostalgic performances, we spoke with festival curator Martha Preve about what we both hope will be the first of many Days of the Dead festivals.

First off I wanted to ask how this festival came about.

We're an indie theatre company that has residency at FRIGID New York, so we’ve been there for about 6 years now. And we always do something to celebrate the Day of the Dead. We’ve done a play, we had a cabaret, during the pandemic it was virtual. This year I was asked, “If you had the budget, what would you like to do?” And I said, “My dream would be to have a festival.” FRIGID New York approached me and said, "Let’s make it happen." Of course we don’t have all the budget, but we scaled it to our possibilities, and this is the first time we've done something like this.

Was there anything especially challenging about doing this for the first time?

We were trying to decide what exactly we wanted as part of the festival, because the Day of the Dead is very different from Halloween. But I do like celebrating both, and in Mexico a lot of people do. So we had to ask: do we want this to be purely Hispanic? Do we want to include more people? Do we want to include Halloween stuff? For me, what I like about celebrating this in New York is being able to include very different companies from different backgrounds. So just coming to those decisions and figuring out how to navigate that. And I’m very happy with the lineup. It's diverse: there are things about death, dying, and the afterlife that are not necessarily spooky. But we also have spooky shows like Edgar Allan Poe. We have a kids' show that is ghost-related, and a burlesque show that is vampire-related. So there’s a lot of variation.

I wanted to ask about that because, as you were just saying, this festival seems to have something for everyone: a bit of horror, a bit of fun, and even some more inspiring shows. Is there anything you’re especially excited to share with people?

I want to see them all, honestly, because I’ve only seen a couple. I’ve seen The Waiting, which is a musical about the afterlife, and our Day of the Dead cabaret. For the One Man Poe, this guy is doing the show and then getting on a plane back to England right after it. So I’m really excited to see that one. But I’m going to be there for all of them. I’m really happy to have this all come together and just have the opportunity to see all these talented actors.

On that note, what’s been the most fun or satisfying part of putting this all together?

Dia de los Muertos is my favorite holiday, so I like to share it with people. It’s been really fun to talk to everyone and explain what we’re trying to do. Our show has an ofrenda, the traditional altar to the dead, but we’re going to have a small one for the whole festival outside (or in The Kraine, at the box office). If you have a loved one that has passed away that you want to include in the ofrenda, we'll put that in for you. I guess my favorite thing has been building community with people, because that’s the idea, right? It’s a community celebration of our ancestors and family histories. I’m excited to share that and to have this be the first of many, hopefully, and to be able to expand it in the future.

I love that you’re bringing this Day of the Dead tradition and paying tribute but also transforming it through theatre.

To me, it’s very important that it’s something that is kept alive, and that means it gets transformed. My grandmother used to put up her ofrenda and she loved pumpkin pie, so she would add pumpkin pie to the ofrenda. That’s a very American thing, we don’t have pumpkin pie in Mexico. But she loved it so she wanted it to be part of the celebration. I absolutely agree with guarding a tradition and respecting it and keeping it alive. But our company’s take on it is to try and modernize it to bring it to audiences here. That means sometimes we do something in English instead of in Spanish to include people that have never celebrated Day of the Dead. As I said, we're also including other types of shows that are not necessarily related to Mexican tradition, but they are about death and dying. To me, it’s very important to have it, to explain and share it, then transform it. What are we doing that is new? How does our generation want to celebrate these traditions? 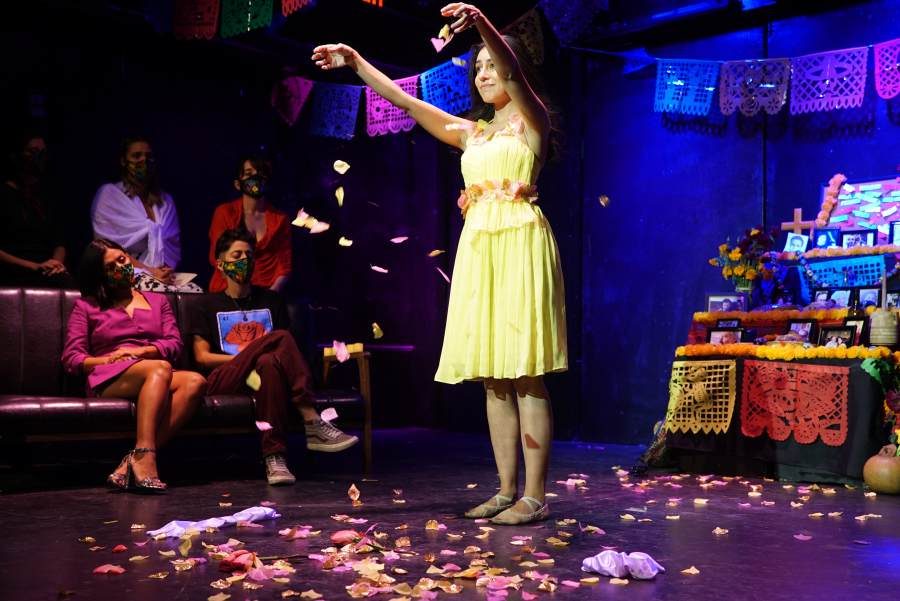 Going back to the Halloween aspect of the festival, why do you think the spooky and macabre attract us?

I think it’s curiosity for the unknown. We’re touching on something that is a product of our imagination and also a product of folk tales and legends and myths. As humans we’re just curious about that: what’s there, what’s after that we cannot see, what other forces are in play. So I think it comes from a place of the unknown and the curiosity of what that means. Throughout time, it’s been transformed into something cool that you get dressed up for. As a theatre person, I love to dress up and put on makeup. So all the spooky Halloween stuff is a great opportunity for that creativity, an outlet, with no questions asked.

Do you have any favorite Halloween or Day of the Dead memories?

Where I’m from in Mexico, we have a big meal with the celebration, which doesn’t happen everywhere. In other places, you have a special sweet bread and hot chocolate, but in the Yucatan Peninsula we have a big meal. I would describe it as this big tamale that gets buried and cooked underground. There's also a citrus salad with chili powder, and the chocolate and all that. My grandma would have to try to entertain the children until lunchtime. So she would make us build the ofrenda, and it was always a scavenger hunt. “Find your grandpa’s favorite dominos. Where are they?" "Where is the picture of your great grandmother?” Just the kids looking for all the things and putting together this ofrenda, and then seeing the final product. All my memories are of this big meal and my grandma passing on the traditions—in her own way because like I said, she used pumpkin pie.

The Days of the Dead Festival, produced by FRIGID New York and Something From Abroad, runs October 20-November 1 at The Kraine Theater (85 E 4th St) and UNDER St. Marks (94 St Marks Pl). Tickets ($25 in-person; $20 streaming) are available for advance purchase at www.frigid.nyc.