September 27, 2017
Theater Feature
Brooklyn
Opera
Rinde Eckert
Interview: Rinde Eckert on The Mask of Performance and Starring in ‘My Lai’

Rinde Eckert defies the conventions of form and structure with his boundary-pushing works which combine opera, musical theatre, film and dance. As a librettist he’s reinvented works of literature, as a composer he’s channeled personal history through otherworldly melodies, and as a director he constantly challenges audience members. In My Lai, having its NY debut at BAM’s Next Wave Festival, he gets to shine as a performer, on a piece where he plays infamous US Army pilot Hugh Thompson, who was revered by some and abhorred by others when he tried to prevent the civilian massacre at My Lai during the Vietnam War. I spoke to Eckert about returning to a part he knows quite well, and how his own interdisciplinary skills came into play when shaping the character.

What kind of research did you have to do to play Hugh Thompson?

There’s a lot of stuff on the internet, interviews on YouTube, documentaries, and there’s a book called The Forgotten Hero of My Lai, which was very helpful. I ended up talking to Larry Colburn who was his gunner. It’s not hard to get information on Hugh Thompson. Then it’s just simply going through the text itself in the piece and trying to figure out a way through. One of the aspects of this is one has to remember it’s not a documentary, I’m not trying to physically be him or use his Southern drawl, we’re universalizing him. Because it’s an opera you can’t take on the same rhythms of the character, opera is also much more demonstrative, Thompson played everything close to the chest. He only told people what they needed from him, but never offered more. In interviews people wanted him to talk about his several marriages, which some have implied didn’t work because of PTSD, but he never talked about them. You’re dealing with a man who was private, so a lot of what was written about him was speculation. He died of liver cancer in 2006, Larry was with him at the end, many people have honored his reticence.

Sometimes head on is not the best way to determine someone’s character, it’s been very interesting to watch him field questions. Doing research once for a piece, I interviewed eye doctors during examinations, and I remember there was one woman who was going blind and her husband was in the room. She was putting a good face on everything, but I was watching the husband as she talked, and I realized he was telling me a great deal more about the situation than she was. He was collapsing in the corner and I could see how difficult it had been for both of them. I think a lot of times you look at things and put a sense of who the people were, so I put together a version of who Thompson was for me, and you hope it does service to the man. In Chicago, Larry Colburn, came to see the show and after it was over he threw his arms around me and said “you got it right, he would’ve loved this version of himself.” I think we ended up capturing the feeling.

In the show, he grapples with his legacy. Did the character send you down an introspective road and make you wonder about your own legacy?

I think that’s inevitable, you start thinking of the critical moments that have shaped your own life, and what you’re holding on to, what you’re proud of. Many of us are lucky not to have the kind of decisive moments where you know your life is about to change, but Thompson had that. I hope I never have to make the kind of cataclysmic decision he had to take at that moment. In the opera there’s a beautiful moment when I sing “the world is changed, forever changed.” He suddenly had responsibilities he never had before, but in interviews he just says “well, you know, that’s what happened to me,” people want him to expand on his emotions and he says “that’s life in the military.” There’s something incredibly brave and refreshing about that. This summer I went through a kind of crisis where I went to a life coach to talk about these things, but it had something to do with putting myself in Hugh Thompson’s position, I didn’t make that connection until you pointed it out, but there definitely was an influence there.

You’ve played the part before, how is it to inhabit this character with such long breaks in between? Do you learn new things about Thompson during the breaks?

Every time we come back to it we find new things, even in performing, last time I did it in Singapore a new possibility opened up while I was in the middle of it. I saw it very clearly and responded to it immediately, it was something that had never occurred to me or director Mark DeChiazza. There’s nothing spontaneous about the rhythms of opera, there’s no improvisation at all, having no flexibility is nice, it’s like putting on a very strict costume that brings you back to where you need to be. You put on a mask and it dictates to you what the character is, the mask remembers, you submit to it and it informs the body on what it needs to do. I become a combination of the understandings of the librettists, composers, the director’s imagination and my own research. I’m doing service to other people’s visions as well. I’m in service to a kind of collective understanding of this character. When I disappear for a long time, I put on the mask and I’m back to a place I know well, I’m not starting from scratch. 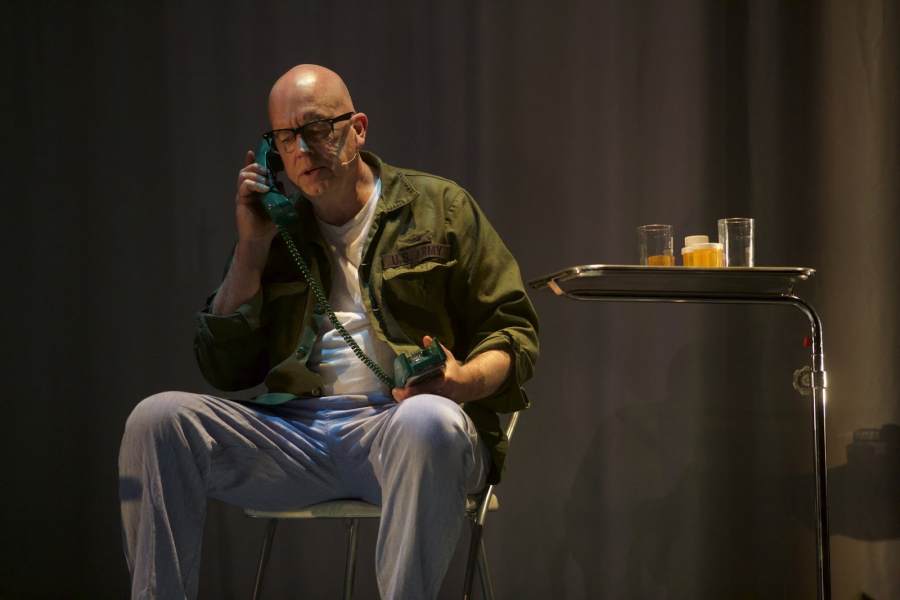 You’ve composed scores and written librettos for other artists. Is it hard to take of your librettist and composer hats when you’re at the service of someone else’s vision?

The wonderful thing about this process is they knew who I was an artist, so they encouraged my participation. I got an early copy of the libretto, it was Harriet Scott Chessman’s first, but not mine, so she asked for my opinion. She and the composer Jonathan Berger responded positively to the things I had to say. It was very nice feeling I could be a part of the initial process, so by the time we got to the real draft, most of my issues were already solved. I felt really engaged, they honored my points of view and that meant I could really give up those hats later on, because I had already weighed in.

Imaginary City was inspired by the works of Italo Calvino which you interpreted as images and sounds, how did you become fascinated with this sort of theatrical alchemy in which you turn one element into another?

I started early on as an opera singer, then quickly in my 20s it became clear to me that wasn’t where my life was, but I was fascinated with opera. At its inception opera was intended to be this great interdisciplinary project with dance, acting and music. I got together with a group of people in California, among them Paul Dresher, and we threw everything out. We just wanted to get in a room and see what happened, we explored things, threw out sets, linearity, narrative, and as we worked all of those things started coming back. We had a couple of extremely abstract pieces that were trying to avoid meaning, but it just kept coming back in. Paul and I said it was time to reintroduce narrative, and once we had that we became excited by the prospect of exploring through objects, movement, light and visuals. Once you’re excited you realize you can tell stories through movement, image...there’s an energy you need to channel and that’s where the alchemy comes in. It’s not something you can put on a piece of paper, you need to do the experiments, put these elements in proximity with each other and see. One of my favorite moments in my works is in Horizon, where I’m lying on a table on a piece of paper and someone’s drawing my supine body across a long table. While that’s going on there’s an organ prelude I wrote playing in the background, and then I’m having a conversation with my father. I can’t point to any one of these things to explain why it works, but I love that aspect of it. The synergy created goes well beyond the elements. Once you’ve been to Gay Paree you don’t wanna come back, you need that high, it really is like alchemy, you can’t rationalize it.

As a professor at Princeton do you have any formulas you use to challenge your students?

I tend to start immediately by engaging them in the process, generally the first thing I do in class is I have students look at the room we’re in. Sometimes they’re not very interesting rooms, so I ask them to look where they are and we talk about the aspects of the room. At first it’s just like “it’s just a room with walls,” but I ask them to suggest the difference between the corners, or where’s the clock in relation to another object. Then we put people in the corner, we play with different aspects of it and suddenly at some point they start seeing possibilities. They see the room is a set of intersecting planes, I talk about what I call amplified values, I take a horizontal line, say from a table, and line it against the wall, and ask them to talk about the values they share. Rudimentarily we look at all these relationships, then you bring in music and words, and suddenly they have all the possibilities. There’s no formula I can write that will make them feel the synergy of all those elements working together, when they feel the physical release that the art provides, that’s when I know I finally got them to a place where we can talk.

Interview: Max Von Essen on the Timeliness of R...
Review of ‘All Wounds Bleed’
Interview with ‘Once on This Island’ C...
An Interview with Liz Callaway