The newly-revived The Cover of Life is a family affair both on-stage and off-stage. Director Stephen S. Miller shares with us his exuberance and anticipation in bringing to life a work written by his late uncle, R.T. Robinson, which includes a strong character modeled after and named for his own mother.

How long have you had this revival in the works? What was your process of bringing it to the stage?

Overall, the idea of reviving this production has been mulling around in my mind for the past 20+ years of my life. I had a desire as I was growing up after losing my uncle to bring the show back to stage. He was such an important part of my life growing up, spending time with him and being part of the process of the theater. When I had the chance to do it recently, I finally broke out everything that was building up in my mind that would allow for this show to be successful in the great memory of my dear uncle Ronn. The process of bringing it back to the stage involved communication with some of the family pertaining to the show, including my mother who the role of “Kate Miller” was named after. As well as research of what my uncle had completed through the process of bringing this to the stage and reviewing the paperwork that I had collected through the years and even the paperwork that was left behind when he passed. Being able to utilize the memory of seeing the show at the American Place Theater and beyond, having access to the family information, as well as the original paperwork that was in place allowed for me to utilize the original design plans that R. T. Robinson had created, and then having the ability to implement the ideas that I had created in my own mind. Both of which were very similar to the ideas of my uncle. When the casting process of this show was done, I was very particular about who I was going to be casting in this production because I wanted it to be similar yet, different enough from the original cast. During the interview/audition process, I was very intuitive into the lives of each of the actors/actresses to learn about what they have been through, and how similar they were to character that they would be portraying. Each one had something special to bring to the stage through the character that they would be playing, and being able to utilize those feelings and bring the stage alive through this production. Each person has honestly blown me away with their performance of this show, and with this, I know that my uncle would be the most proud person, along with my mother Kate Miller and the rest of the family.

As a kid, did you have access to the initial run? If so, please tell us about your favorite memory of it.

Growing up, I spent quite a bit of time with my Uncle Ronn and had the opportunity to be the fly on the wall listening to the planning stages of how this show was going to be presented, and where it was going to be presented. As well as learning the whole story behind what the show was based around. The most incredible aspect that I found during my childhood, and even more as an adult, was that the story was based so much on truth with the influences of such great classic writers that brought such an influence to my uncle. As the show was progressing to the stage it started its run in Florida for the developmental stage, in which I had the opportunity to see the original run in Florida, and then it came up the coast when it landed at the Hartford Stage, in Hartford Connecticut before receiving the chance to become and off Broadway show at the American Place Theater in association with the Lortel organization. I had the chance to see it at the Hartford stage, and multiple times at the American Place Theater Off Broadway including Opening night. 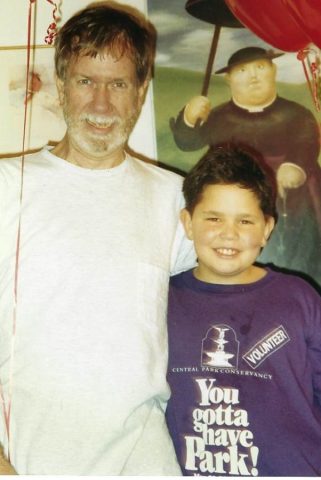 What are you most excited about when you see a performance of The Cover of Life today? What did you think about most after the first time you saw it performed?

Going back to the casting aspect, I wanted to touch on the aspect of each of the characters that were casted, and the role of Aunt Ola (Amy Losi) is casted as an exact clone of my uncles mother, with the same style, personality, and physical look. It was quite amazing to find someone like this that would be so perfect for the role. The role of Kate Miller is a wonderful actress who is portraying the role exactly as who my mother really is, through communication, working one on one with my Kate Miller, and realizing just how similar they were through the process. The role of Tood is exactly as the role is to be played, and is exactly as my uncle would have perceived this to be. The original actress that played this role, was very similar to Jessica Carillo (Tood Cliffert) in the personality and direction that the role is being perceived to be. The role of Weetsie, played by Abigail Milnor-Sweetser is vastly different from who she is, but as a classically trained brilliant actress, she has been able to turn her personality around to play this role EXACTLY as its written, and exactly as my uncle perceived it to be, its honestly quite amazing. The role of Addie Mae (Maia Nero) is perceived to be a character full of character, slightly over the top, questionable, yet the comic relief of the show. The role is played beautifully by Nero and was exactly what my uncle saw the role to be played. The first time that I had a chance to sit down with Maia Nero, I immediately had a realization that this was our Addie Mae, she was so similar and exactly as the role was written to be. The role of Tommy, being the only male in the show was very tough to cast because the person had to be exactly perfect for the role, and when I met Thomas Kalnas (Tommy Cliffert) I had again a realization that this was the perfect male to play this role. Thomas is welcomed to the New York stage for the first time in his career in the production of the cover of life, and he has taken to the stage with perfection. Having the chance to work with him allowed for me to see that there is true talent on the stage even though it may be there first time on the New York Stage. Thomas took to the stage with honesty and truly took the role and made it his own. Now, the most controversial role in the show is the role of Sybil Cliffert (Molly Callahan) is written to be a very sexualized, provocative and unhappy woman with many issues personally and physically. The aspect of all of these different personality phases needed to come across in a tasteful, 1940’s style, because in the 1940’s women were not really spreading themselves around town with multiple men, and although sex sells in today's world, it was so vastly different in the 1940’s. So in the process of creating the role for the stage in 2018, I was trying to direct in the way that it would have been in the 1940’s, which could be called different or distasteful because through the research that I had completed in the process, I had found that through speaking with an original photographer from Life Magazine whom I have become friendly with through the years, as well as friends that lived through the 1940’s to bring the role to where it is now. Its sexually provocative without being over the top.

What do you do when you are NOT in the theatre?

As a producer, I tend to keep myself busy with keeping positive vibes going for the show. But I am also working on my college career in getting my bachelors in Psychology to progress my life forward in and outside of the theater.

Any plans to turn it into a film?

I would love to do this show as a film, but I’m not sure if that will happen at this moment in time. Anything is possible.

The Cover of Life

Review: Great Performances Anchor the Female-Centered ‘The Cover of Life’

In its first revival, appropriately debuting on International Women’s Day, R.T. Robinson’s work The Cover of Life depicts all the hopes and regrets women face, no matter how happy they are with the choices they make. Set in 1943, the show opens with Kate Miller (Jill Cook), a journalist at Life magazine in New York, telling how the three Cliffert brothers have enlisted in three different branches of the US military on the same day. By doing this, they have brought together their wives Weetsie, Tood and Sybil (Abigail Milner-Sweetser, Jessica Carillo, Molly Callahan) in a household headed by their mother Aunt Ola (Amy Losi) in Sterlington, Louisiana. It soon becomes apparent that the women, none related by blood, are now each other’s family, whether they like it or not. Kate hears about this through a local photojournalist Addie Mae (Maia Nero) and, seeing this “women’s piece” as her opportunity to write a cover story, agrees to spend a week with the Clifferts in their home to “get the real story”. Famous last words. Kate’s week in Louisiana leads to all the women discovering things about themselves, each other and their place in the Cliffert family and 1943 America. The play is alm …Read more