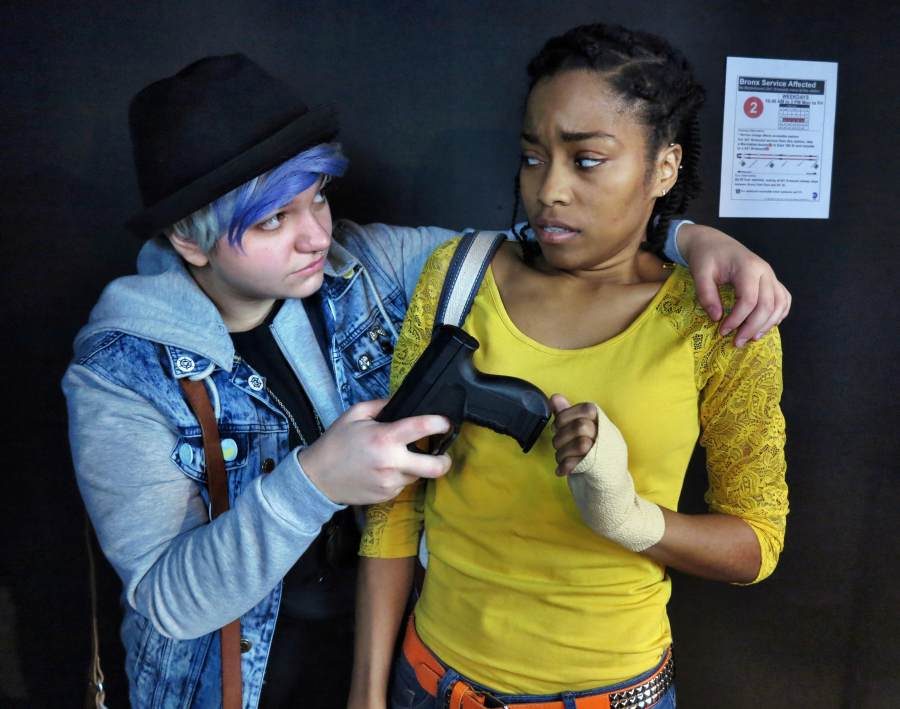 The center of this particular subway ride is Chevonn (Sarah Shah), a teenager who needs to write an essay in order to advance to the 12th grade, according to her teacher Mr. Evers (Levern Williams). She chooses to write about all the people she encounters on the subway on the day she decides to buy a gun to kill her mother (Jacqueline Nwabueze).

The play is told in flashbacks of Chevonn’s life, cleverly interspersed with the stories of strong characters surrounding her and with God as a latter-day Andy Warhol (played to perfection by John Patterson). The show opens with a crowded subway featuring everyone in the cast (Shah, Williams, Nwabueze, Patterson, Sebastian Gutierrez, Jeremy Landieri, Natalie Marie Martino, Mohamed Madboly, Brandon SNGDNC Mellette, Yesenia Rivas, Camille Upshaw). The cast all take on roles familiar on every subway ride – the distracted MTA booth teller, other MTA workers, the soulful musician, the hipsters, the “bad” kids, and the strung-out veteran.

Shah as Chevonn is nearly incandescent in her pain and frustration, a rare actress who embodies her role in such a way that I had to remind myself this was a show and not her speaking personally to me. Mellette as the PTSD-stricken veteran matches her pain in a parallel storyline. A closer look at all the characters reveals that everyone has at least a low level of pain and frustration in their lives of just doing the best they can to live through another day, and, on any given day, not all of us are going to make it.

Chevonn meets up with Emmett (Martino), a transmale student who has heard Chevonn wants to buy a gun. Bullied and pursued by his own demons, Emmett sees a kindred spirit in Chevonn and wants to help. But Chevonn is too young and mired in adults’ expectations to clearly think of how to get help, if it is even available, and her desperation mounts.

Flawlessly directed, interactive, with stellar dancing (particularly from Landieri, who pops-and-locks in homage to Michael Jackson at all the right moments in this 90-minute nonstop ride), the ingenuity of the script and synergy from the cast is compelling. The props and set by Susan Hemley and Lytza R. Colon, respectively, are well-done, particularly when the cast creates the apartment where Chevonn and her mother live. This is a play that will stay with you for the rest of your life.

In Manhattan at Theater for the New City