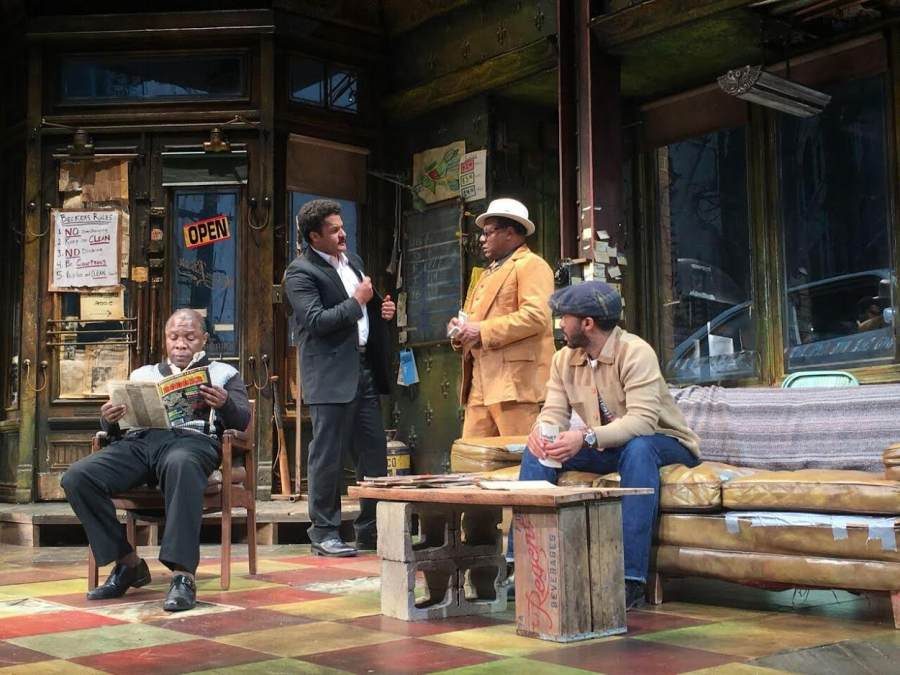 You know youʼre cool when someone congratulates you on your Tony nomination and you do the verbal equivalent of a shrug. Critically acclaimed scenic designer David Gallo, the visionary behind the world of August Wilsonʼs Jitney on Broadway, is even cooler than that. Mr. Gallo is nominated for his second Tony Award, after having won his first for The Drowsy Chaperone in 2006. He spoke with StageBuddy about the dynamic world of scenic design, having August Wilsonʼs iPod, and what keeps him coming back to the drawing board. 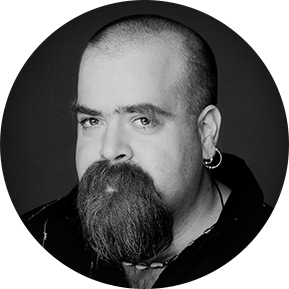 Whatʼs the trick to balancing the artistic whole with all the details of an elaborate play world?

All of the details are part of what I do. When everything clicks is when the details become much more apparent. There comes a point when it all sort of converges...the micro and macro become clear at the same time. Every design decision thatʼs to made at that point hopefully becomes apparent. It doesnʼt mean that theyʼre easy, you just know thereʼs an answer.

Were there any unforeseen challenges to designing Jitney the second time around?

I had specific feelings about the piece that I developed further in this Broadway version, but I think that it being a repeat production was actually sort of helpful. As far as specific challenges, I wanted a lot of air around the set. Those are some pretty big dudes (laughs)...I would say a specific challenge of this production was fitting it in that venue. It all sort of flowed fairly organically. If the audience had any idea how damn small those Broadway theaters are, I guess theyʼd be much more impressed by all the crap that we shove inside.

What attracts you to a new project?

Every project has a new beginning. Thatʼs whatʼs so thrilling and intimidating at the same time...starting with a completely blank page. When you begin, thereʼs a script, a point of view behind the production, an idea. Your role is to figure out how the show is going to be presented. With everything new, itʼs like, where are we going to go with this one? Thatʼs as exciting today as when I first started. 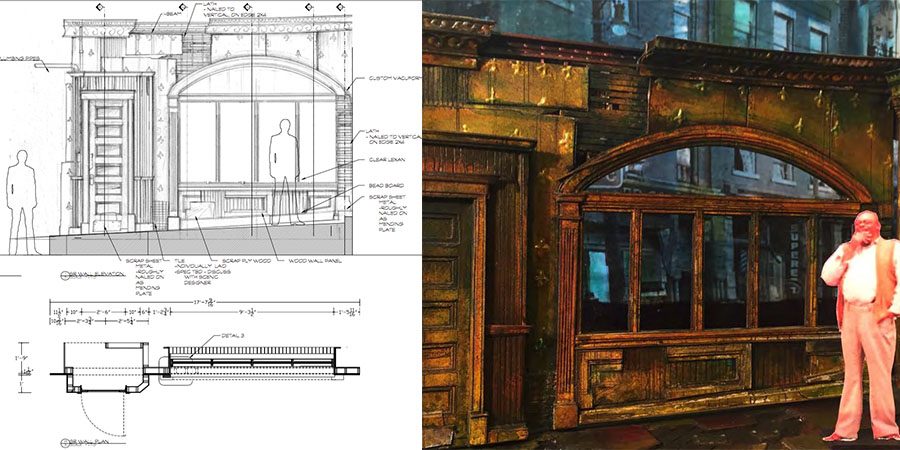 How has scenic design changed? How has it remained the same?

The goals are the same. Weʼre responsible for the style of the production, like it or not. When the curtain goes up, what you see is going to establish the style more than anything. If itʼs an empty theater, thatʼs the style. The set design is an empty theater and therefore thatʼs the style. One of the most dramatic changes is that thereʼs no time anymore. Projects happen on a much more accelerated schedule, especially commercial ones.

The biggest change, a good change, is that musicals are no longer written to be designable. When Rodgers and Hammerstein were writing, when all the great musicals  were being created, they were written in a very particular way. They were laid out to be designable, and writers stopped doing that decades ago. Writing for the stage became entirely cinematic, or any other of a hundred different styles, but no one sits down to write a play anymore and worries about how theyʼre going to do it...when Death of a Salesman was written, it almost didnʼt get produced. They didnʼt think it was possible to design a set that could tell that story. This is that serious. Jo Mielziner figured out the most complicated American play, design wise, ever written. In 1949, there was a question of whether this could happen, nobody could conceive of a set that could do everything it needed to do. Now everything is written like Death of a Salesman...in its own form. Thatʼs incredibly exciting. The technology has kept up. We have new ways of doing things that came out of artistic necessity.

Do you find that the designs call for something a more malleable than before?

The scenic designerʼs role is to figure out how weʼre going to do it...how we are going to tell this story. It doesnʼt take away from the literature. When Tony Kushner wrote Angels in America...he didnʼt worry about the fact that he had incredible number of scenes, locations, rapidly leaping through time and space. He wrote the play he wanted to write, one of the greatest things ever written, completely designable...but the solutions donʼt come with the script. (laughs) Designing that show is hard, there was a time when shows were a bit easier to figure out.

As to malleable, it depends on what you choose for your solution to drive the play. Simple solutions have simple problems. More robust ideas may work well but sometimes back you into a corner. The pitfall of technology driven shows or anything that is reliant upon a complex physical mechanism is the playwrights and director are often no longer able to make changes the way they used to.  When you were working on a musical out of town in the 1950s and they decided to flip some scenes around, some stagehands came in the morning, untied some drops, moved them, and redid the show that afternoon. You canʼt do that anymore (laughs). The design options have become much more vast and often complex. The resources available for a new a musical is something thatʼs changed dramatically for the good. 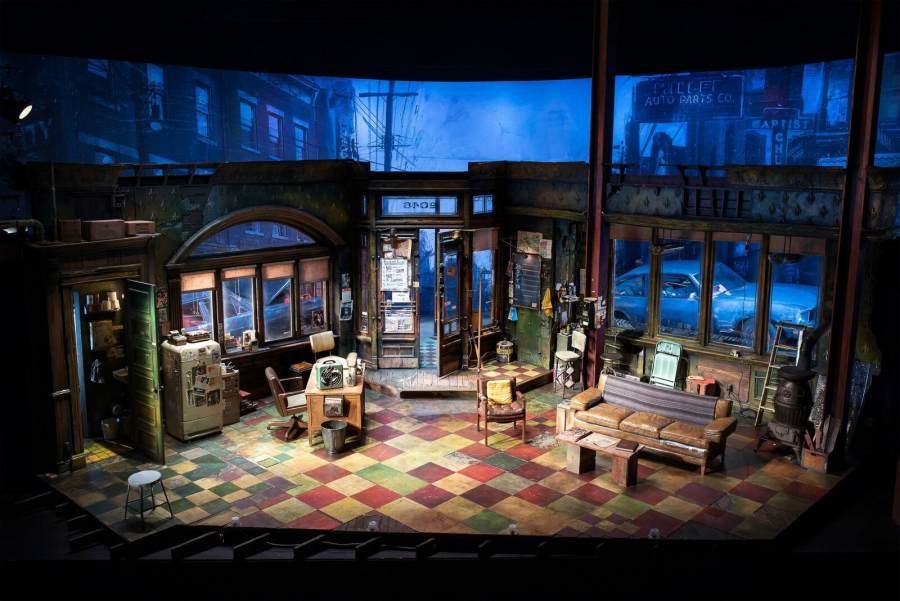 What music do you listen to when you hit the drawing board?

Could be based on the production, could be something opposite. I have to work in silence a lot of the time. Over the years I realized I consume music in a very particular way, and canʼt really have it on as background. If Iʼm going to play music while Iʼm working, it has to be something very specific as a choice. If Iʼm going to work on Jitney, I listen to music that was the influence of the playwright. I actually own August Wilsonʼs iPod (laughs). His musical tastes and mine werenʼt that far apart...I would say American soul music, RnB, and the Blues were something he and I bonded on tremendously.

I was hanging out with Todd Kreidler who was the son August never had. Todd was with August virtually every day of his life for almost a decade. I told him how I was hanging out with August one time, grabbed his iPod, and started looking at it. Thatʼs what you used to do back then, you would grab somebodyʼs iPod and start looking at it to see if they were cool. I already knew that August was cool, but this was my big chance to check him out. After he passed away, I told Todd what a drag it was that he didnʼt have that iPod, and Todd was like “hold on a second, he burned three copies.” Thatʼs helpful when working on an August Wilson play.

A lot of the music...he didnʼt pick because he liked listening to it. Thereʼs about ten thousand songs. A whole bunch of it is old school American patriotic music. He was looking for the perfect song to use in Gem of the Ocean. “I Belong to the Band” is the song he chose, but all the songs he rejected are on his iPod. Once August found out that you could buy an entire record by clicking something on the computer, he became obsessed. This is a cat who spent his whole life going to record stores, and now heʼs just downloading like crazy. Itʼs pretty cool.

What is the best thing about being a scenic designer?

Creating entire worlds. I wanted to build worlds and I get to do that. Every day is different. Iʼm sitting at Sesame Street right now, but on my computer is this incredibly wacky piece of theatre that Iʼm creating... You get to lead a very eclectic life when youʼre a scenic designer and thatʼs a very appealing thing. One day youʼre in seventeenth century France, the next day on Sesame Street, the next day in Pittsburgh in 1977, you know? Thatʼs kind of great. Iʼll take that.

In Manhattan at Jitney