April 6, 2017
Theater Feature
New York
West Willage
Off-Off-Broadway
Plays
Reid Farrington
Sara Farrington
Interview: Playwright Sara Farrington on Merging Film and Theatre in ‘CasablancaBox’
Entering the space at HERE where Sara Farrington and Reid Farrington are putting the finishing touches on their CasablancaBox feels a little bit like going back in time. There are people dressed in 1940s costumes, references to air raids and the war, and an actress playing Ingrid Bergman is in the middle of an intimate moment with her swoon-worthy co-star...and then, someone yells “lights” and the enchantment gives way to another kind of magic: the creation of art. Rather than being a nostalgia piece about the prevalence of Michael Curtiz’s Oscar-winning classic, CasablancaBox is a celebration of the creative spirit through the film. Simple wooden panels are used to build worlds straight out of 1942, while scenes from the film are projected on see-through screens placed in front of actors, as if to remind us “yes, even something as miraculous as Casablanca was made by flesh and bone people”. During a break from rehearsal I sat down with playwright Sara Farrington, one of these flesh and bone magicians who seemed as excited about the process of putting together the show, as she was in talking about other art she loves.

In the preview I just saw there was Easter egg after Easter egg, even though there was a scene with Ingrid Bergman and Roberto Rossellini, she was reciting lines Ilsa says in Casablanca, and he was talking about making Stromboli.

I’m glad you caught all that!

I’m a big Ingrid Bergman buff. Can you talk about the world where the show takes place?

Technically it’s the making of the movie in July 1942, but we treat that as a spine from which a million stories come out. Our only rule was that we had to return to Casablanca, we couldn’t stray too far from the movie, if we did our show would lose its spine.

Reid and I are big on contemporary storytelling without using an obscure subject matter, Reid’s done things like A Christmas Carol which everybody knows, so when you have something like that the audience comes equipped, which means you can fuck around with form. We like twisting theatre as a genre as far as we can because people know the material already, there’s something quite thrilling in that for us. For me as an original playwright that’s like jamming on something, I’m more of a classical theatre maker than Reid is, so the two coming together is great because he can take the innovative form-pushing and I can write around that.

Because these materials are so beloved are you worried then that the angry villagers will show up with pitchforks and torches?

(Laughs) We have thought about that, but now I really think we’re doing a love letter. If you know it you’ll be in on the joke, but we’ve also had people who don’t know the film and still enjoy watching it. It’s not about just Casablanca either, we could do this with Gone with the Wind, The Wizard of Oz, Citizen Kane…

Are you going to?

We talked about doing a trilogy, but I don’t know. Now that we know what the piece is after three years of development, the idea of doing something else is just staggering. Obviously I would love to do it though.

Did you also collaborate with Reid in his The Passion of Joan of Arc piece?

We met at the Wooster Group on my last year there, I was an intern and he was a video designer, and he left to do work on his own which was really ballsy. I’d never seen a person do that before and it was very inspiring, I basically didn’t work with him on a piece until this one. We built this from the very first day together, we never wanted to do this as a husband and wife but here we are… 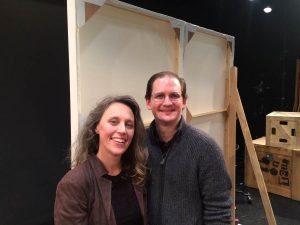 How many times did you have to watch the movie?

I’d seen it many times before we got the idea, and I’ve watched it so many times since but it’s never boring. The 65th time I see it I still get sucked into it. Sometimes I go to specific moments too.

The best way I found to describe what I saw is as if Picasso imagined Casablanca.

Use it! (Laughs) But right, we look at it from different angles, obviously Picasso would do a profile with two eyes on one side, but yes, it truly is that. Reid changed the way I looked at theatre, he wants to see theatre in every way except the straightforward way. The only thing I think he was missing was the storytelling aspect which I brought, so it’s been a great melding of minds.

You guys obviously loved the magic of Casablanca and are now trying to figure out what the spell was, so is this a process of dissecting this to explain it to yourselves or to share the formula with the world?

A lot of the stuff was stumbled upon, and a lot of the stuff was in the ether, they began shooting this movie six months after Pearl Harbor, so imagine that feeling. They didn’t know the outcome of the war and yet something about the film predicts the outcome, and has this incredible American-ness to it. It works, I don’t think they intended it to work like this, it was a perfect storm of time, place, artists involved, politics, everything crashed to make an accidental work of art.

So how is it to be making art in this political climate?

It couldn’t have come at a better time, when we started in 2014 the world hadn’t changed, there was a refugee crisis but it hadn’t become what it is now which is an acceleration of pain and suffering. So in addition to this we have the 75th anniversary of the film which is incredible timing. Nearly everybody who did Casablanca was a refugee from Europe, so all their stories are as scary and harrowing as what’s going on now.

I love when writers give voices to real life people, so how was it for you to give a voice to Bogie, Michael Curtiz or Paul Henreid?

That’s what I think people are going to come to me after for, the voices of people they love. My dad considers Bogart a friend, so for me to show Henreid having a meltdown onstage will be something. I’m a dramatist, my only job is to create drama, if people can’t imagine Henreid being difficult I can’t do anything about it, I need to create drama sometimes at the expense of what people imagined these people to be like. I just wrote a piece about Edith Wharton and people were bothered with how I perceived her, which is the only freedom I have. Being a playwright is a shitty, kicked around job, but the one freedom I have is to dramatize things, it’s how I make sense of the world.

So one last thing, are you Team Rick or Team Laszlo?

I’ve thought about this and I go back and forth.

People might kill me for saying this but I think Laszlo is miscast. They should’ve cast a fevery, crazy eyed guy, he should look like Andy Warhol. Seeing a well put together man like Paul Henreid is confusing, because if he’d been the other guy I’d rooted for him to save the world. But the way he’s cast I’m on the side of Bogart because who wouldn’t be? I think had Henreid looked a little bit crazier I would’ve been OK with it.

Yeah! He’s gotta be nuts! He escaped a concentration camp, but you know Hollywood thought that would look like Henreid.