The dining scene of New York’s Theater District is quickly becoming one of the best of the city, and few people know it better than the actors who call the neighborhood their second home. In this installment of thEATer, we chatted with Justin Keats, who is currently wowing audiences in Cirque du Soleil's Paramour on Broadway. Check out Justin's favorite spots below! 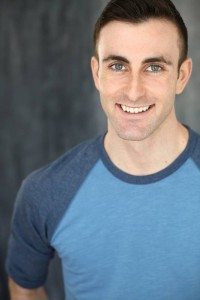 My favorite post-show hang is BEA. Once you and your group agree upon the correct saying of the name, which is "be-ah" not "bee" or "bay-ah", you can enjoy a very chill after show hang. With old classic movies being projected on the walls, it’s the perfect post Paramour spot. Their Empire Sunset margarita is one of the best in Manhattan. Everything they cook is homemade and delicious. I’m not a fish eater, but even I have ordered their tuna tartare with guacamole as a post show snack.

Dinner with the family before the show?

Getting cast in Paramour during previews and learning an ever changing show in nine days knowing your parents are flying across country to see your first ever Broadway performance is enough to make anyone unable to eat. So even though I didn’t get to go to dinner with them because of pre-debut nerves, I did plan out their dining experience and sent them to Hell's Kitchen. For Southern Californians a good fresh-mex meal is all that's needed. I personally crave their Brussels Sprout Tacos. Plus a pre-show Devil's Nightcap margarita is never a bad idea.

One rainy winter day a year ago, I was auditioning for another show and was cut, as it goes, and to ease our audition blues, Jeff Kuhr of Kinky Boots decided we needed a good bagel and some laughs. He took me across the street on 35th St. to Best Bagel and Coffee. I actually just Googled the name to make sure I wasn’t making it up. If you’re looking for a real New York Bagel: This is it. My emptiness of not “booking" was quickly filled by a garlic bagel, chipotle chicken sandwich. Since that day, if I have a rehearsal by the theater or in one of the near by rehearsal spaces, I grab a Best Bagel and a few laughs with a friend if available.

Sadly, I’m not supposed to consume caffeine, but I am allowed decaf and on warm day I can be spotted crossing Times Square in full Cirque du Soleil makeup, mustache and all, to Blue Bottle Coffee on 41st. It’s right across from Bryant Park so there are tons of tables to sit at and catch up with friends or sit and read by yourself or during the holiday season stroll through the pop-up shops. Get the NOLA cold brew and thank me later.

Schmackary’s is THE PLACE to get a sweet treat on a two-show day…or a one-show day after doing well at an audition…or a one-show day where you just feel like you need it…or on a day off when you find yourself taking a half-hour train ride for a maple bacon cookie and end up buying a dozen cookies to bring to the dressing room to snack on throughout the week. Don’t judge me until you've tried them! Side note, they deliver nationwide.

Place where you run into your friends?

If you’re looking to find friends on any given day of the week head to New World Plaza. If it’s nice out, all you have to do is grab some food from either Mother Burger, Blockheads, or grab some soup dumplings to go from Kung Fu Little Steamed Buns Ramen (yes, that’s the actual name of the place) and take it to the plaza. There will always be someone you know there coming from an audition needing to decompress, or a friend finishing their workout at Temple gym that you can convince to grab a $5 margarita with, or like that one time when I ran into my best friend Amy Quanbeck who ended up telling me she booked her Broadway debut in Charlie and the Chocolate Factory and you both end up crying and hugging in front of the fountain. It’s the place for all this and more and I’ll see you there!