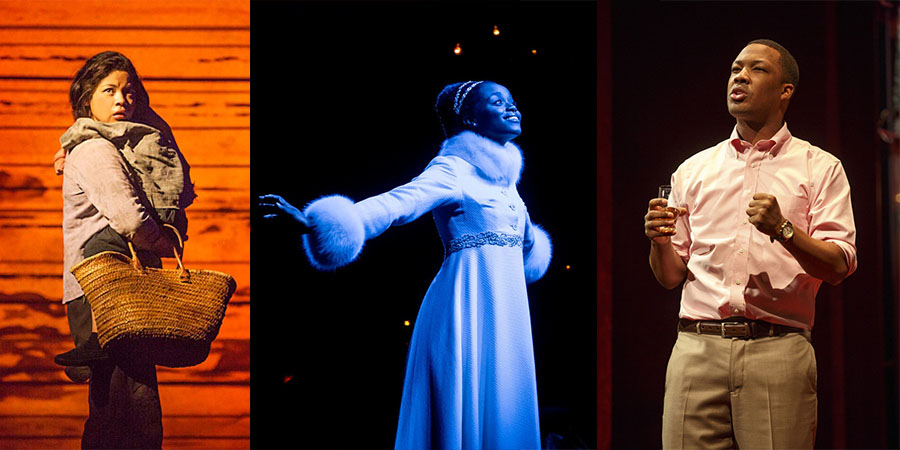 The numbers may seem small, but this is significant progress in a world that is realizing that "color-inclusive" is more accurate than "color-blind". It is worth noting that the list of 2016 nominees included Lupita N'yongo, Daveed Diggs, Renée Elise Goldsberry, Philippa Soo, Lin-Manuel Miranda, Saycon Sengbloh, Sophie Okonedo, and winners Leslie Odom Jr. and Cynthia Erivo.

The color-inclusion trend continues and all indications show it is here to stay. Audiences have embraced Hamilton to such a degree that tickets passed the $1000 mark well over a year ago. That is supply-and-demand at work before our very eyes.

Eva Noblezada is up for Best Lead Actress in a Musical for her portrayal of Kim in Miss Saigon, an emotionally- and vocally-challenging role she has played eight days a week in both London and NYC. Denée Benton is up for the same award, for her portrayal of Natasha Rostova in the 2016 musical Natasha, Pierre, & The Great Comet of 1812.

Michelle Wilson (Cynthia in Sweat) is also up for Best Lead Actress in a young new work that has already won the Pulitzer Prize, the second of the prestigious award received by playwright Lynn Nottage, making her the first female playwright to win the prestigious award twice (her previous award was in 2009 for Ruined.) With two Pulitzer Prizes, Ms. Nottage,who is African-American, has joined the ranks of other multiple winners such as Eugene O'Neill and Tennessee Williams.

Outside of the Tonys, the nominees take on iconic roles. John Douglas Thompson (nominated for his portrayal of Becker in Jitney) is starring as Caius Cassius in Julius Caesar in the acclaimed Shakespeare in the Park. Condola Rashad, a multiple-nominee, this year for A Doll's House: Part 2 and in 2009 for Ms. Nottage's Ruined, has a featured role as Diana in the award-winning Netflix series Master of None. The classically-trained Corey Hawkins is nominated for originating the role of Paul in Six Degrees of Separation, and has starred as Dr. Dre in the movie Straight Outta Compton as well as Heath in The Walking Dead.

These actors are likely to enjoy long careers on Broadway, which is less youth-oriented than film and television. Several actors over age 40 are nominated in all categories, and not just for playing someone's parent: David Hyde Pierce and Bette Midler, both for Hello, Dolly!, Patti LuPone for Gypsy, Mary Beth Peil for Anastasia. While the majority of these older nominees are Caucasian, they had established their careers and built up a body of work in a time when casting was far less inclusive than it has become in recent years.

Even more important, there is now a theatre-going audience that knows talented actors come from all backgrounds, and expects nothing less to be represented on the stage.