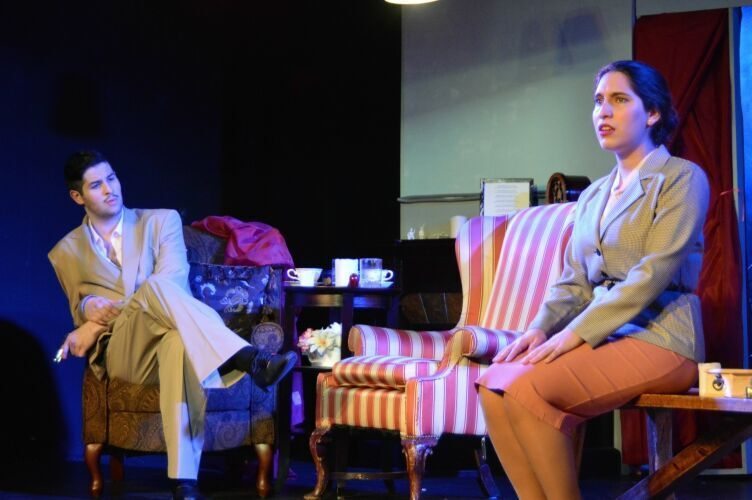 Agatha Christie’s And Then There Were None is the world’s bestselling mystery novel for a reason: its brilliant and terrifying premise has been capturing our minds and tapping into our fears for almost 80 years. The Players Theatre and Be Bold! Productions are taking on quite the legacy with their new production of the play, and they deliver on the suspense and drama that made the book so wonderful.

A group of ten guests gather on Soldier Island at the invitation of a mysterious host, who has been detained in London and not yet appeared. As they get to know one another, their conversation is interrupted by a pre-recorded tape that calls each of them out by name, and accuses them of a murder. Shocked, the guests assume they have been made victim of some terrible practical joke, but when Anthony Marston (John Dillon) dies of cyanide in his drink, the “joke” takes a more serious turn.

The group resolves to get off the island when the boat comes for them the next morning, since there isn’t one in the island itself. But the next morning, the boat doesn’t come – and General MacKenzie (Charles Baran) is stabbed to death. After a search of the island comes back empty, Sir Lawrence Wargrave (Jonathan Rion Bethea) concludes that the murderer must be one of the guests.

With a storm on the horizon, the group is left stranded on the islands, as the suspicion – and the body count – only rises.

Directed by David Beris, this production of And Then There Were None captures what makes Christie’s novel great: not just the suspense, but the uniqueness and humanity of her characters that makes for such enticing storytelling. The company in this play pulls together Christie’s mismatched cast of characters well, bringing to life the tensions of the premise (even if their British accents at times feel a bit canned).

The set design, also done by David Beris, emphasizes those tensions. Set in one seemingly ordinary room, on a small stage, with ten people crammed into it, the claustrophobia of the set brings out the fear in the play’s trapped characters. Even as the number of players dwindle, the growing space onstage comes with ominous undertones, as everyone glances between themselves, trying to figure out who the murderer is – and who will be the next to go. Bringing out the suspense in that last point, Ali Hall’s lighting design does a marvelous job of making each death a shock, keeping suspense high in this thrilling production of Agatha Christie’s finest work.

Review: The Conspiracists
Review: World Premiere of Québecoise play ‘A...
Review: APAC’s ‘Jump’ asks the h...
Review of ‘The Naturalists’