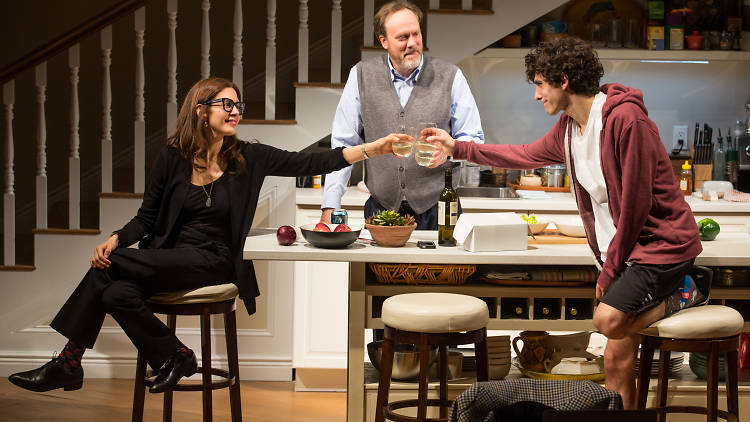 What it’s about: Lincoln Center Theater's Admissions explores the ideals and contradictions of a liberal white family in New England. Sherri Rosen-Mason is head of the admissions department at a New England prep school, fighting to diversify the student body.  Alongside her husband, the school's Headmaster, they've largely succeeded in bringing a stodgy institution into the twenty-first century. But when their only son sets his sights on an Ivy League university, personal ambition collides with progressive values.

Why you should see it: A lot of people are talking about this play – it’s subject matter is controversial, to say the least. Joshua Harmon is a celebrated playwright, most known for Bad Jews, and you’ll find in Admissions Harmon’s acerbic wit combined with the self-loathing that so many of Harmon’s characters display. The performances by Jessica Hecht, Andrew Garman and Ben Edelman are superb. Edelman lends his lengthy monologues and his generally unlikable character a ton of charm and humanity. Garman has very little to say but packs a punch in every line he delivers. Hecht’s performance is the most understated, but also the most complex, as she handles her dual role as a social change maker and a mother with grace and poise. Director Daniel Aukin paces the action of the play well.

What could have been better: Because of the subject matter, some audience members (especially those belonging to the minority communities) may find the play offensive, even triggering. It’s difficult to parse through the play’s intentions and the audience reactions, which includes one moment of thunderous applause at a decidedly bleak view of the world.

The Last Word(s): You may or may not agree with the point of view presented in this play. Whichever side you fall on, just know there’s another.

Significant Other might have been the most refreshing show of the Broadway season, if the season was 1989. If it had opened one year after Wendy Wasserstein’s The Heidi Chronicles, to which it clearly owes so much, Joshua Harmon’s play might have proved revolutionary for revolving around a gay man whose main conflict isn’t coming out, but learning how to be single. If the show had opened in 1989, it would have been strange to see how sanitized its version of a single gay man is – AIDS would’ve undoubtedly been a part of his worries, and he would have been concerned about his friends getting sick and/or dying – but it would’ve still been commendable for placing a gay man at the center of its escapist universe. But in the year 2017 its escapism isn’t admirable, it’s downright cowardly. We are living in an age where the Pride Parade is one of the most vibrant events in the NYC calendar, where hookup apps have become predominant, and where AIDS is no longer a worry if your physician can get you on PrEP. So why is the hero of Harmon’s play living in a Doris Day vehicle? Jordan Berman (Gideon Glick) has almost everything a person could dream of, he’s in his late 20s and has a successful …Read more

Review of ‘Skintight’
Review of the Public Theater’s ‘Twelfth Night’...
Review of ‘Dinner with Georgette’
Review: ‘No-No Boy,’ about the Afterma...