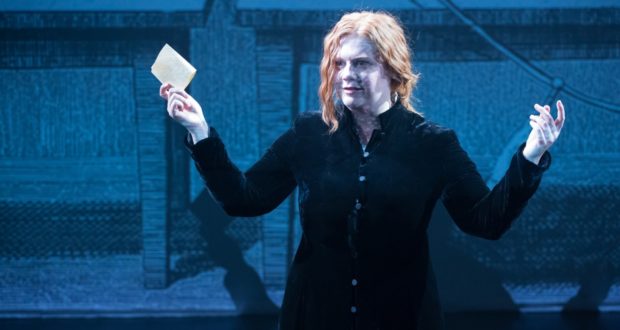 AMP is an hour-long multimedia show that jumps through time as writer and actor Jody Christopherson tells the story of Mary Shelley, author of Frankenstein, and how she came to write such a tale, interspersed with text from Lord Byron, her husband poet Percy Shelley, and her parents, authors William Godwin and Mary Wollstonecraft.

Inspired by Luigi Galvani's 1780 discovery of bioelectricity, when he caused a frog's leg muscles to twitch with an electrical spark, the 19-year-old Shelley is galvanized to write Frankenstein as she recounts her life story, a tale involving her British feminist mother, who died shortly after her birth in 1797, and how she spends her life chasing "the love [I] almost had." She goes on to detail her life, including the troubled relationship with her stepmother, a neighbor whom her father married because “it was the only thing he could do”. She has a better relationship with her stepsister, Clare Clairmont, who goes on to marry the poet Lord Byron.

The live action on stage is spliced with a film of a woman (also played by Christopherson) in an asylum in 1952 Massachusetts, when they practiced electroshock therapy. The unnamed woman played the cello and was one of the first women to go to the blind auditions for the famed Boston Symphony before her commitment to the asylum. These scenes were shot on location at abandoned asylums.

Christopherson's attention to detail in bringing forth this historical tale is painstaking and impressive. Coupled with the sound and projection skills of Martha Goode, it is a finely-tuned ballet of sight, sound and graphic horror. Christopherson’s enunciation and dramatic acting is engaging and magnetic as she visually carries the entire show from start to finish.

However, there was no real connection between what was happening on stage and on screen. It often came off as disjointed instead. It seemed at some points that Mary Shelley may have been talking to a descendant of hers, since the same actress was on stage and on screen, and so looked the same with a few differences in hairstyle. However, no explanations or tie-ins between the two were ever given, so one can only wonder.

Overall, AMP is a very well-researched, well-written and well-executed, and certainly educational play about a fascinating accomplished young woman and her family. In fact, for this piece, Christopherson received a 2017 New York Society Library grant, for emerging female writers writing about history and literature.

Review: The Other Mozart

The Other Mozart is astounding from start to finish, with one actor, one set and a trove of history and humor that tells the story of Nannerl Mozart, the oft-forgotten elder sister of world-famous composer Wolfgang Amadeus Mozart. Visually stunning and utterly captivating, Jody Christopherson delivers a winning performance as Nannerl (and the family members who talk down to her and stifle her dream). Nannerl is herself an accomplished composer and musician who tours Europe with her father and little brother “Wolfie” until her parents and society deem she has reached “marriageable age.” Being too accomplished will prevent her from attracting a husband, and so Nannerl is pressured to put down the clavichord and pick up the embroidery circle instead. Nannerl, bored and lonely after being abandoned emotionally and physically by her father, talks of a dream denied; her story is all the more heartbreaking for her resilience in a time and place that will allow her nothing for being born a female, and an impoverished one at that. Although music and fashions have changed drastically since the 1700s, many of the messages to women have not, and that is perhaps the greatest draw of The Other M …Read more