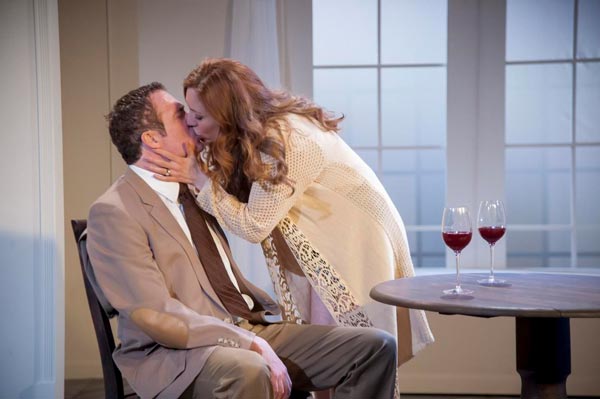 Harold Pinter’s 1978 play Betrayal, currently playing at Hoboken’s Mile Square Theatre, was inspired by his seven-year affair with the English journalist and “thinking man’s crumpet” Joan Bakewell. It is a potent cocktail of extra-marital affairs and the stinging remains left over from repeated, incremental deception.

In 1977, Emma (Dena Tyler) summons Jerry (Aidan Redmond) to meet her in a bar two years after their liaison has ended. When Jerry congratulates the two of them for keeping their affair clandestine, Emma tells him that her husband Robert (Matthew Lawler), also Jerry's close friend and publishing colleague, has been having affairs throughout their marriage and that the night before, she confessed to Robert her erstwhile affair with Jerry. But as we discover, this isn’t true. Robert has known about his wife’s affair for much longer. As was Pinter's way with the pen, the action has happened already, only with this drama, we see the affair in a reverse time sequence, in which betrayals from all parties provide ballast to an uncomfortable course.

Jerry, Emma and Robert soak themselves in each scene with boozy battles and professional one-upmanship. “I hate brandy,” says publisher Robert to literary agent Jerry, “it stinks of modern literature.” One must question the integrity of love in these trysts that appear to thrive off the kind of passion that is appropriate for a smug yet dissatisfied intelligentsia.

Accents may occasionally two-step between mid-Atlantic and Thames Estuary, but the mark of this production is that a stumble or two doesn’t matter so much in the scheming of its Pinteresque pull. When Lawler slips back into his own American accent, he appears more at ease with his ill at ease character Robert, a man whose ego forces a clenched bite from his mandible. Whenever Robert gets a sense of being duped, he restrains himself with sour pomposity. Tyler gives long suffering wife and literary man magnet Emma the kind of carnality that suggests that the girl can't help it. She is a woman on the edge of always wanting and losing. Redmond enters each scene as though the room should be glad to have him, as befits his character Jerry, who is very much a man of his era, self-assured but not self-aware. It is a poised, charismatic performance.

The strenuousness behind this class-laden repartee reinforces Matthew J. Fick’s rigid and simplistic scenic design. Words mask insecurities whereas silence interprets them. In MST artistic director and Betrayal director Chris O'Connor's hands, those Pinter pauses are less conspicuous. But when Jerry says to Emma, "I don't think we don't love each other," it is a case of words compensating for listlessness. No matter the authenticity of the heart’s desires, it is the residue of mounting discrepancies, petite deceits and sporting self-interests that puts Betrayal up there with Pinter’s best.