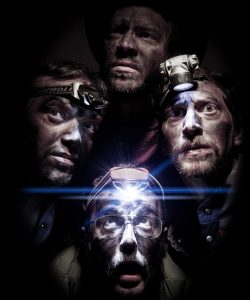 In Butcher Holler Here We Come, now on stage at The Tank, writer Casey Wimpee and director Leah Bonvissuto have teamed up to create an emotionally dark yet stunning portrait of humanity in crisis.

It seems kismet that the play found its way to the Tank's DarkFest, an annual challenge for playwrights to create works utilizing alternative light sources; Butcher Holler, which only now makes its New York City debut after several successful runs across the country, is lit only by headlamps worn by the actors onstage. If that sounds like a mere gimmick, any such thoughts quickly fade as soon as the lights go out. Set in 1973 in West Virginia, the play opens in darkness and chaos. A coal mine has just collapsed, killing five men and trapping five others, who must fight to stay alive and hold on to their sanity. The audience becomes at once voyeur and participant as the miners move through and around the performance space, the play weaving between nightmare and reality to create an emotionally and physically immersive experience from the first line to the last, at once captivating and genuinely frightening.

Wimpee's guttural, poetic dialogue comes in strange, surreal ebbs and flows, voices merging and fading away in bits and fragments, like a primal game of call and response or like echoes, bouncing off the walls. "Now I got a frog in my throat that's gonna tell you a story, but first... you gotta shut your eyes," Leander, played with harsh authority by Adam Laten Willson, calls from the blackness. "Shut our eyes?" someone responds from the mire. "We're already in the fuckin dark."

The details of the narrative, namely uncovering the truth of what caused the accident, occasionally get bogged down in the overwhelming thrust of the experience, though signifiers of time and place pull the play out of its fugue: one man wonders what Neil Armstrong would do in their situation, another sings the jingle for Brylcreem again and again. As a method of "coping," the men sing songs to themselves from the Grand Ole Opry songbook -- Conway Twitty to Dolly Parton. The play also reveals that the men are not only connected by their rural existence and side-by-side physical labors, but also by the bonds of family, by blood, by marriage, or by cohabitation. And ultimately, the exercise in the unravelling of the human psyche supersedes the plot, as the play challenges the way we cling to stories for truth and for comfort and to keep ourselves human, even as we pervert them and watch our collective histories change with each retelling.

The dislocating, brilliant sound design comes hand in hand with remarkable vocal performances that slice through the darkness and resonate through the Tank's tight theater space, whether in collective shouts or plaintive, bone-chilling gasps. Casey Wimpee offers us fractured men -- hacking coughs, hiccups, drug addictions, haunted pasts -- yet the powerful cast cinches them together as men bonded in despair. Cole Wimpee, Casey's brother and the artistic director of their non-profit arts collective, Aztec Economy, marries guilt and fear as Jet. Isaac Byrne as Hiccup slips in and out of lucidity with believable ease, and Adam Belvo delivers an unforgettably unhinged performance as the ketamine addicted K-Bus.

The mission of Aztec Economy is to showcase works with an emphasis on "American Culture and its relationship to ritual, mythology, madness, dreams, and deliverance." Butcher Holler Here We Come stomps and kicks and gasps its way through each one of these huge topics, swirling them around in a pitch dark stew, imploring us to hold on and pray for escape.

Butcher Holler Here We Come is headlining the DarkFest at the Tank through August 2nd, after which it will begin an extended run at the West Park Presbyterian Church through August 8th.