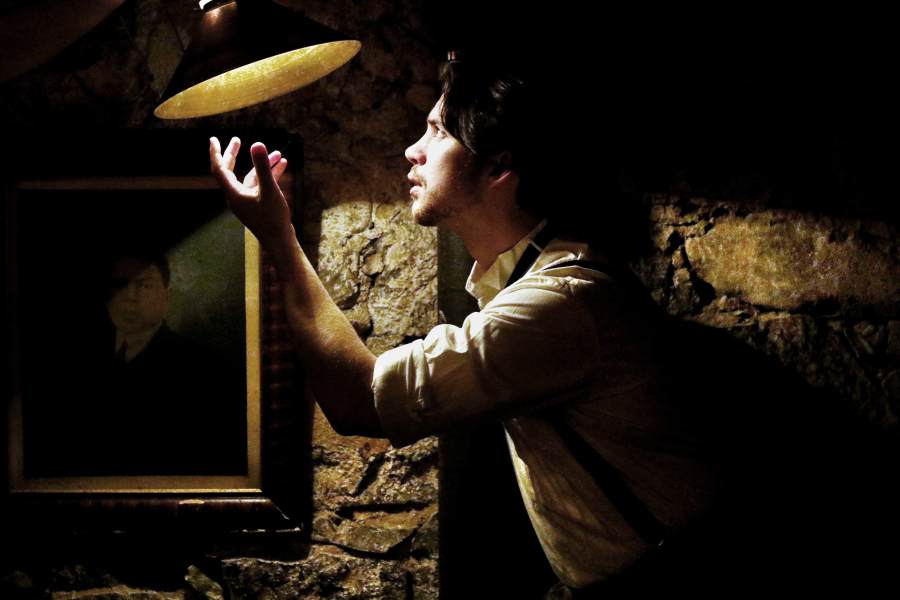 What a difference a space makes, in the case of The Cooping Theory: Who Killed Edgar Allan Poe? the space is the refurbished speakeasy under St. Mazie Bar & Supper Club, where Poseidon Theatre Company’s immersive supernatural experience takes place. Audience members are welcomed to the year 1949 and to a special meeting of The Poe Society by one of its most charismatic members, James (Gordon Palagi) who warns them to watch their step, as he recounts a quick history of the Society and shows them to their assigned seats. Following James down the dimly lit hallway and the mysterious, steep staircase is a perfect preamble considering the riches to be found once we arrive in the bar, a place that sees to be entirely made of wood and glass bottles, brimming with spooky paintings, bare lightbulbs and tchotchkes, the ideal space to mingle with the spirits if there ever was one.

In between ordering from St. Mazie’s menu (there is a $25 minimum to be spent, but it should be no problem to achieve this between the array of artisanal cocktails and entrees) we find out two things: there is rising tension between the three members of The Poe Society we will meet that night, and we are waiting for a medium to guide the proceedings. Besides the aforementioned James we hear from Virginia (Caroline Banks) and John (Jeffrey Robbs), each of whom apologizes for the behavior of each other, vastly illuminating the characters’ backstories in no time. We learn that the medium in question will solve the mystery of Poe’s death, which Society members attribute to cooping, a 19th century practice by which people were inebriated and forced by means of blackmail and violence to vote several times for a specific candidate. Using disguises to avoid being discovered by electoral officials, Society members are convinced this was precisely why Poe was found wearing clothes that were not his own on the days before his death.

The show conceived by writers Nate Suggs, Samantha Lacey Johnson, and director Aaron Salazar, contains enough Poe trivia and quotes to satiate the biggest of fans, and when the medium finally appears - this is no Godot situation - the creative team gets to put on a show that ought to have chills going down our spines. And yet, there is something that never fully clicks, in between the overeagerness to please of the characters, the anachronistic synth-infused score that blasts from hidden speakers, and the anticlimactic intermission, the show deflates when it should’ve soared. Perhaps audience members who attend an intermission-less experience (there are three options, only one with intermission) will find themselves more content and haunted.

Where the show excels though is when Salazar creates images that seem to come out of nightmares, if you’re in the right seat, the medium’s entrance for instance has all the power of a ghostly apparition, the kind where you want to tap your neighbor and whisper, or scream, “are you seeing what I’m seeing?”, and there is also an element of erotic tension between Society members, who quarrel about class, but also seem to harbor hidden passions for each other. With a better sense of timing and when to take a break, The Cooping Theory: Who Killed Edgar Allan Poe? would have the promise of a delicious nightmare, the kind that makes you wake up sweaty and breathless, but also holds enough dramatic tension to make you want to go back and see how it will end.

Review of the Royal Shakespeare Company’s &#...
Review of John Patrick Shanley’s ‘I Am...
Review of ‘title of show’ at the Brook...
Review: The Barricade Boys