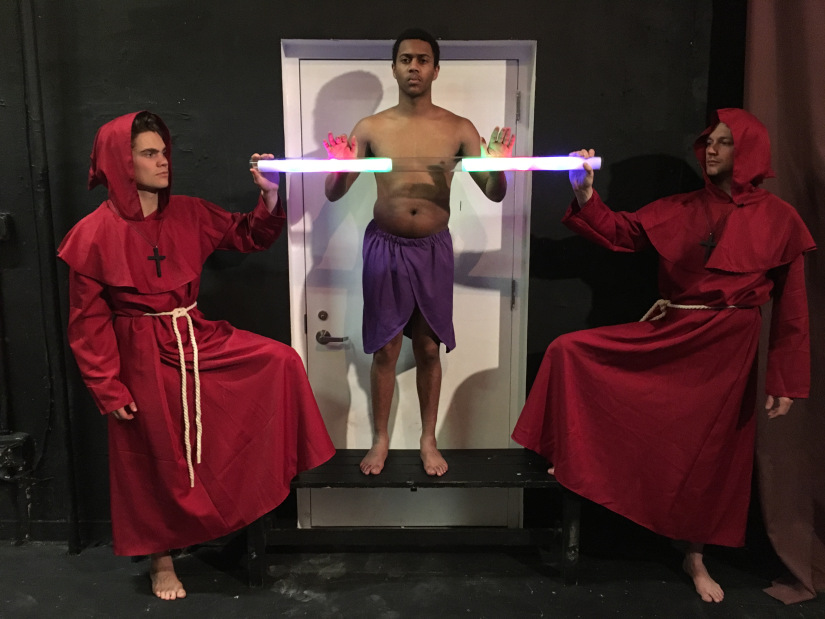 "The Dream of the Rood" is an Old English poem about a talking cross - specifically, the cross on which Christ was crucified. Once a vehicle for administering punishment to the oppressed, the cross is now a symbol of salvation, encrusted with jewels and shining like a beacon, even though the narrator can still glimpse blood flowing from beneath its lavish covering.

All this is well and good, and it's a lovely poem with plenty of Old English flavor. But when I heard about Jeff S. Dailey's stage adaptation of "The Dream of the Rood," I doubted it could be successful. Though beautiful, this is definitely an odd poem: its main character is a talking cross. How on earth could anyone translate that into a play that doesn't come across as laughable?

The answer: with great sensitivity. And against all odds, that's what Dailey's production hinges on. Far from being boring, laughable, or trying too hard, this adaptation (presented by The American Theatre of Actors and Collectio Musicorum, Inc.) is a surprisingly imaginative, enjoyable, and moving fifty minutes of theatre.

The production begins with the lights out. A quivering fire throws huge shadows on the theatre walls, and we hear the wind wailing. While it lasted just a few minutes too long for my taste, this opening effectively set the mood. We're in a medieval monastery (or perhaps just outside it for this first scene). Life is cold, dark, and rather brutal. Without any of our modern technology, we're exposed to the elements, at the mercy of nature.

In this harsh environment, a group of monks -- dressed in bright red and gold -- have already discovered that any light or warmth they desire will have to come from their own imaginations. When one speaks of a dream he has had, the others quickly catch on, and soon the monastery is staging their own kind of pageant: a depiction of the crucifixion from the point of view of the cross.

With plenty of shifts in the action, and a strong cast who excel at channeling the joyful piety of medieval monks, the production succeeds in being engaging throughout. Our group of seven monks (Kaden Caldwell, Ryan Desaulniers, Benjamin Marcus, Galen Molk, Remy Muloway, Dan Wuerdeman, David Yurch) takes on every role the drama calls for -- from literal angels to literal devils, and those in between. But they're most successful when portraying the emotions and sensitivities that would have been common among Old English monks -- the urgent fear of hellfire, the ecstatic joy of redemption, and the deep longing to follow their Redeemer.

The narrative is interspersed with medieval chants, which, coming from opposite sides of the dark, curtained room, conjure a monastery much larger than the actually limited theatre space. It's a reminder of the power inherent in a good play, transporting us back twelve hundred years. We're in a different world, and in that world, a talking cross isn't laughable at all - though it is delightful.

The Dream of the Rood

In Manhattan at American Theatre of Actors