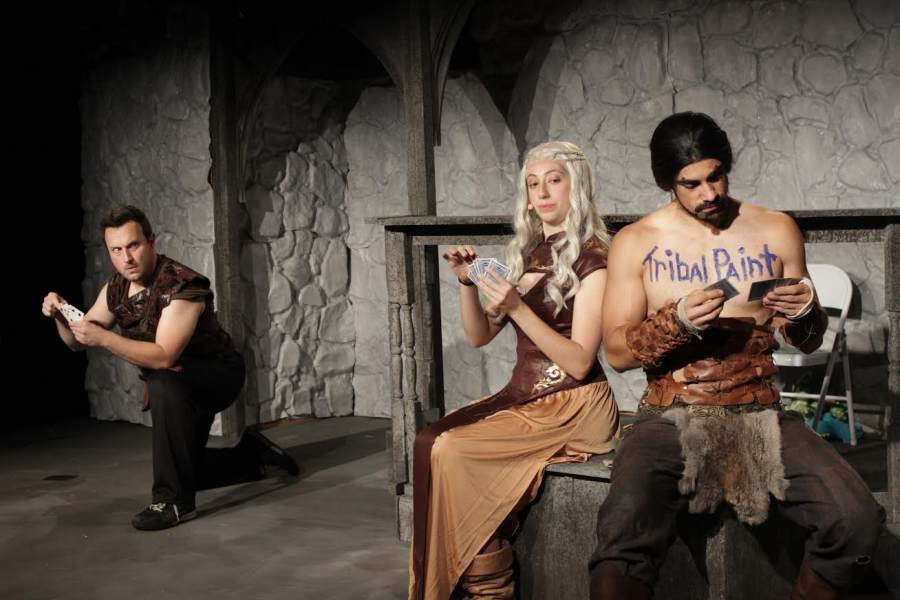 HBO’s hit show Game of Thrones has been infuriating audiences since 2011 with its many character deaths and long season breaks. Still, the show has earned a cult following of avid fans. And it was a group of enthusiastic fans, Steven Christopher Parker, Steven Brandon and Erin “Queenie” Stegeman who decided to write, co-produce and co-direct Game of Thrones: The Rock Musical, currently playing at the Jerry Orbach Theatre. The musical, which is a completely unauthorized parody, gives the television show the royal parody treatment, which includes rock heavy dance numbers, making fun of John Snow (Zachary Evan Kanner) and an appearance by author George R.R. Martin (Jay Stephenson) himself.

As someone who has never seen an entire episode of Game of Thrones I was fairly intrigued as to how this musical would go. Parodies are all the rage after all, with Puffs (the unauthorized Harry Potter parody) having a long run at New World Stages and other internet parodies like A Very Potter Musical becoming part of mainstream fandom culture. And it was easy to see why parodies are so popular after seeing the Game of Thrones version.

Instead of trying to incorporate all seven seasons of the show into one musical, Game of Thrones: The Rock Musical focuses predominantly on the first season of the series. Issues like the legitimacy of Prince Joffrey rears its ugly head, as does Daenerys Targaryen’s (Mandie Hittleman) arranged marriage to Viserys (Randy Wade Kelley) and Ned Stark's (Milo Shearer) apparent treason and many other sub plots. References are of course hilariously made to what the audience already knows from watching the newest season of the show but that does not take away from the major plot.

The actual concept of a Game of Thrones musical may seem a little too out there, but it actually works. The songs written by Parker, Brandon and Stegeman and music producer and director Ace Marrero are funny, witty, and well researched. Extreme fans will be able to pick out minute details from the show in the song lyrics, and if something isn’t right, they certainly let the cast know it. After seeing a few funny arguments between actors and the audience, it is clear to see that series lovers truly have a passion for the world of George R.R. Martin’s characters.

Since this is a musical there were quite a few dance numbers, and none of them were disappointing. No audience member every thought they would see Daenerys standing in a full dragon leotard while doing the can-can next to Ned Stark, but it happened. And so did Hodor (Ryan Pifher) having a solo, even if he only said his name over and over and over again while doing his own version of the moon walk. Dancing was not everyone’s strong suit, and given the limited amount of stage space in the theatre it did look slightly packed with the entire cast moving at once, but the majority of the numbers flowed well and drew numerous laughs from the audience.

And what would a musical be without top notch singers? Ned Stark belted so well he sounded like Drew from Rock of Ages with a voice that screamed '80s rock and roll. There must be some good genes in the Stark family since Rob Stark (Jeff Bratz), Arya Stark (Meghan Modrovsky) and Stansa Stark (Allison Lobel) were also fine singers who stood out amongst the rest of the cast. As many other parodies are, almost all the lyrics were silly and playful, but it was a nice change of pace since it didn’t feel like the usual doomsday feeling that an episode of Game of Thrones usually has.

Even though I have never seen a full episode of the show, Game of Thrones: The Rock Musical was still incredibly enjoyable and easy to follow. It would have been nice to have more context on all of the characters instead of whispering questions to my seat neighbor but I still understood exactly what was going on minus a few inside jokes here and there. Now after seeing this show I desperately need the feel to binge-watch the entire seven seasons before next year.

Game of Thrones: The Rock Musical

In Manhattan at Jerry Orbach Theater

After stepping up the musical parody genre with Lost: The Musical, creators Steven Christopher Parker and Steven Brandon tackle another beloved part of the cultural zeitgeist, Game of Thrones. In their hilarious rock musical parody, Game of Thrones: The Rock Musical – An Unauthorized Parody, the Stevens hilariously and mercilessly rip into the completely mock-worthy characters, make them break out into song and dance, and give the ultimate wink wink, nudge nudge to the show’s superfans. In an interview, Director/Writer/Producer Steven Parker talks about lovingly taking the piss out of his, and the universe’s, favorite TV show. StageBuddy: When and how did the idea for Game of Thrones the Rock Musical: An Unauthorized Parody come about? Steven Christopher Parker: Three years ago, Writer and Producer] Steven Brandon and I created Lost: The Musical, which parodied all six seasons of the hit ABC show and turned it into one two-hour musical. It was thrilling, exciting, completely exhausting, overwhelming and we vowed to take a long break from musicals after we finished. Of course that break didn’t last very long because soon after we knew that GoT had to be our next parody to tackle. We …Read more

Megan Wrappe is a journalist and theatre critic from Winston-Salem, N.C.. She has lived in New York City for the past three years where she has interned with Davenport Theatrical, American Theatre Magazine, and The Stage Directors and Choreographers Union. She is currently on the social media team at Business Insider and reviews shows for ZealNYC.com and Stagebuddy.com