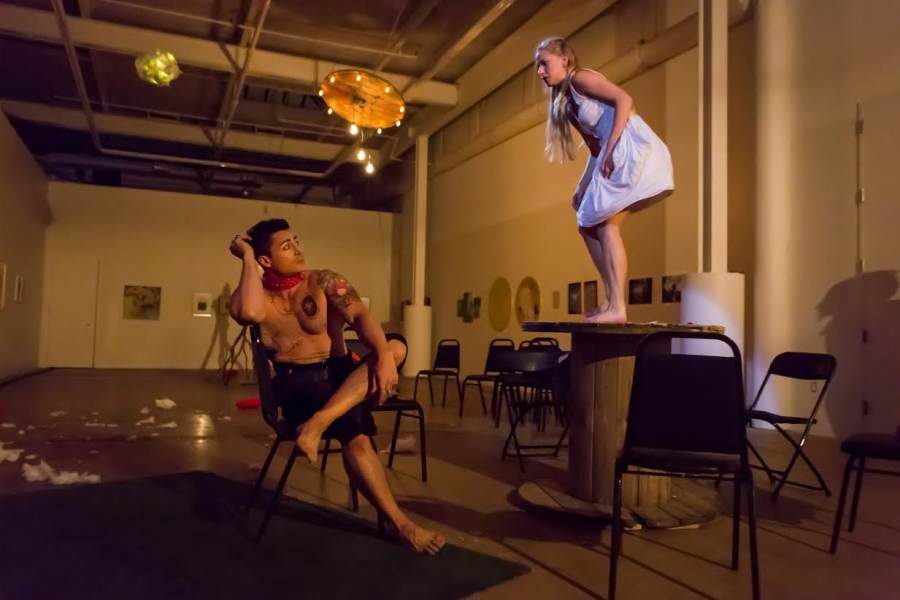 Fernando Arrabal’s love for artists is only matched by the scale of his imagination -- and his is one of the most colorful minds to ever write words for the theater. But it’s an Old Testament love -- unconditional, but remarkably violent -- and his theater, untamed and unceasing, is marked by that biblical sense of self. Dirt [contained] Theater Company, a real dedicated and cool company, have taken a stab at Arrabal’s Garden of Delights, directed by Maria Swisher, perhaps the playwright's work that loves (hates), desires (detests), and needs (rejects) artists the more than any other.

Arrabal’s plays are always about artists and his complicated love for them. Maybe that’s true of everyone. But Arrabal — his characters in a dungeon of their own making, with their self-loathing and ambition at blows with one another — uncovers a truly unique, sadistic (masochistic) love that is as enriching as it is demoralizing. Arrabal understood the complicated vocation of artists as a hapless struggle, as the intensification of the project of knowing yourself. Just as we inevitably remain at a distance from our realization, Arrabal believed an artist will never feel fulfilled, and that lack will be torturous.

In Garden of Delights, an orphan makes a Faustian bargain, takes on the name Lias, and is condemned to be the world's greatest actress, imprisoned by her ghosts and memories. Lias, performed by Tana Sirois, is the vessel, the subject we move and feel with, that charges us. She confronts her id, her distorted self-image, and the repercussions of her ambition — and it is as luscious as it is agonizing. Ultimately, she fights off the demons and locks up with her base self, a triumphant finale that begets the inevitable twitch, as the pendulum eventually, though after we are gone, swings yet again towards the other impulses. It is a powerful play, emblematic of Arrabal’s chaos-surrealism, with dynamic and surprising religious and classical textures that make for a wonderful evening.

Dirt [contained]’s production never shook the sense of little kids busting into Ma’s closet, destroying the room and fitting it to their imagination. Which is kind of great? It totally worked as a design take on Arrabal’s chaotic imagination, but at times it does not fill the space. Performed at the Plaxall Gallery, an awesome, cavernous space, the challenge of Arrabal becomes ever greater. For a script with such potential, with so much frickin' surface area…well, the space begets something. It’s worthwhile to note that most surreal productions make the terribly boring choice of darkness to handle space, a lazy faux-trick; Dirt [contained] did not lean on anything, but shared their creativity through their choices.

At it’s most effective, director Maria Swisher shaped dangerous yet intimate moments through immersive techniques and impressive design elements. The lighting design, by Taylor Michael, a real challenge in such a space, did a damn fine job. The design in general, which ranged from original projections and circus elements, totally went for it. Fernando Arrabal is a playwright of going for it. The production embodied that.

Despite the technical challenges, the major themes of the play — the sense that despite my vivid and intense commitment to my elevated image of self, the dark impulses within me will take their revenge — resonated. They spoke to me as Lias spoke about her misgivings, in one of Arrabal’s many confounding yet beautiful monologues. They spoke to me as the self-hate of Lias’ subconscious was reflected in the design, specifically one disturbing sequence that pictured a string of violence. The play is so fucking full with so many things, and the production totally worked, and I am grateful.