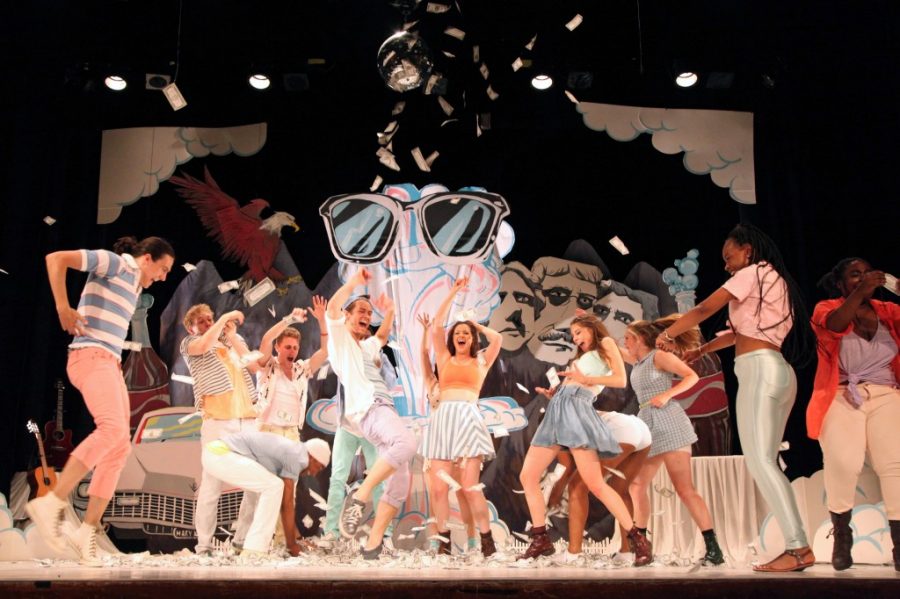 Take it from an English major, Gertrude Stein is a tough nut to crack.

In her bold (and at first glance, very strange) modernist writings, narrative meaning comes secondary to the exploration of language and sound. That's why it's fitting, yet certainly curious, for Stein's work to serve as the source of inspiration behind a relatively new and unquestionably unique... I hesitate to say musical because I feel that's slightly misleading... piece of theater. Directed by Michelle Sutherland and presented by Theater Plastique, "SAINTS!" originally premiered at the NYCFringe Festival with funds they raised through Indiegogo and Kickstarter. Now it's back on stage through the end of the month at the Abrons Arts Center, and it deserves every bit of the "heavenly" buzz it's been getting (my only pun I promise).

Slowly, the modest cast of thirteen reveals itself, boys first and the girls after. The premise loosely seems to structure itself around the cast's ascent into a heaven-like place, where fluffy, white clouds abound. To heighten this sense of locale, the performers, ethnically diverse and easy on the eyes (who knew that heaven's wardrobe looked so much like H&M's Spring 2011 catalogue), frequently gaze up into the distance earnestly and beseechingly, as if filled with desire to please some unseen divine being.

And how do they seek to please our invisible deity? Through a grand display of singing and dancing. The ensemble blends miraculously, and although I feared that some serious showboating might go on, they quickly become a remarkably cohesive and unified whole. In fact, the combined energy and exuberance that seeps forth from the performers is something infectious and impossible to accurately describe, something which can only be explained by a true passion for the material and belief in their work. Which makes sense, seeing that these kids penned the music themselves. No kidding.

When I was in chorus in high school, I distinctly remember the vocal exercises we would use to warm up our voices. Strings of nonsensical words, sometimes just syllables, they were meant to strengthen and explore diction and didn't convey any real meaning.  I'm reminded of this with "Saints". I'm by no means trying to equate "Sally sells seashells by the seashore" to Stein's seminal literature, but the theatrical effect is the same. What did that boy just sing about prunes? What about fish? Once you abandon a notion of narrative structure and language to serve as a guide, the play can wash over you to maximum impact, and the music and dance, along with the expression of the performers, supplants a need to understand what is being said. 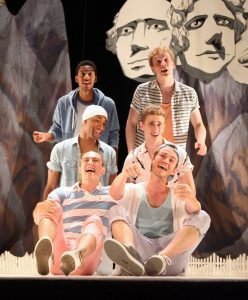 The only real set of clues we are given to guide us through the performance are huge images that descend down from the rafters to serve as a backdrop. They seem to come down as gifts to the kids, and they all have something in common. Coke bottles, a bald eagle, a pink Cadillac.  As the distinctly American iconography presents itself, we begin to realize that what they map for us is the fact that the musical styles being explored, the clapping of gospel, the hip shaking early rock of Elvis, the crotch grabbing swagger of hip hop, are as recognizable, even without words we can understand, as the simple images of Americana.

"I felt this thing/I am an American and I felt this thing," Stein tells us in a moment of clarity. This is, above all else, an incredibly patriotic play, a humble yet ecstatic testament to Stein, to music, to dance. Stein and her "saints" remind us that this musical freedom that transcends words, this ability to sing and dance passionately and with abandon is part of our inheritance, built into the very fabric of what it means to be American.