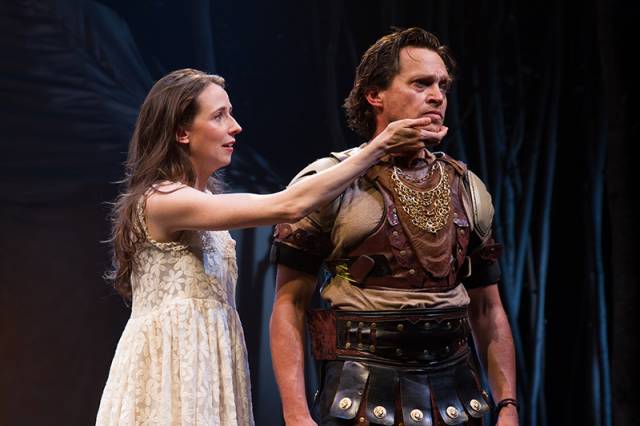 Anne Washburn’s transadaptation of Iphigenia In Aulis, now onstage at the Classic Stage Company’s inaugural Greek Festival, is a mesmerizing, groundbreaking update on Euripides' final tragedy, which premiered in Athens in 405 BC.

Directed by Rachel Chavkin, the play opens with Agamemnon, dressed in armor, striding onto the wooden dock that makes up the simple set and offering us exposition in the form of a fraught monologue about his current woes. Helen has fallen for Paris and let him abscond with her to Troy. Pride injured, her husband Menelaus has called upon the men of Greece to sail to Troy to take back Helen and salvage the nation's honor. A massive Greek army is now camped by the sea, roiling with the fervor of bloodlust and awaiting the command to set sail. They are delayed when a priest divines that to please Artemis and gain favorable winds for their journey, Agamemnon, Menelaus's brother and commander of the army, must sacrifice his eldest daughter, Iphigenia. Agamemnon lures his daughter to the camp on the promise of marrying her to the warrior Achilles, but before he can send off a letter recanting and begging her not to come, she arrives with her mother, his pregnant wife, Clytemnestra. Seized by his sense of honor and frightened by the massive army that cries out for war, he realizes he must carry out the God's bidding.

Even before Iphigenia, Clytemnestra (played with visceral, abject pain by the talented Amber Gray), and her young son Orestes arrive at camp, Washburn breaks from expectation and reveals her most radical departure, which, it happens, is rooted in one of the most traditional elements of Greek drama: the Chorus. Like Euripides', her chorus is made of "foreign women" who comment on the plot as it unfurls and who, like the audience, are at once both invisible to the players and an omniscient intrusion.
But Washburn's chorus plays a more vital role than her forbear's ever could: in a world that valorizes the traits and actions of men far above those of their female counterparts, the chorus is the wildly emotional, evocative heart of the play, adorned in flowers and vibrant colors. Performing music created by The Bengsons, they intercut the narrative with simple, jarring modern choreography (by Sonya Tayeh) and earthshaking, multi-part harmonies in a folksy, gospel style.

The brilliance of Washburn's universe is the subtlety of her historical and mythological revisionism. Achilles, played by the same actor as Agamemnon, the skillful Rob Campbell, is a gum-chewing, slang-talking anachronism that is a brief comic relief in a text that is so lyrically striking, it's difficult to distinguish what text is Washburn's and what she kept intact.

Certainly intact are the principles of honor, strength and glory, which, as the play unfolds are revealed within the universe not only as inherently masculine, but as summarily eclipsing and devaluing the strengths and emotions of the females, often removing them entirely in deference to the machinations of war. It is the rigidity of these principles that send the play careening breakneck into tragedy. Yet in her courage, Iphigenia, played with a carefully parsed mixture of vulnerability and ferocity by Kristen Sieh, proves herself capable of exhibiting a "masculine" sense of democratic worth, trading in her wedding altar for a sacrificial one.

Meanwhile, her chorus, made up of both men and women, also seems to provide an alternative to the rigidity of gender roles. But perhaps, in a mythological universe where great and terrible things only happen to kings and queens and gods and warriors, only the chorus -- we, the commoners -- can escape the bounds of ritual and history, untouched by the gods and asked only to watch and consider.