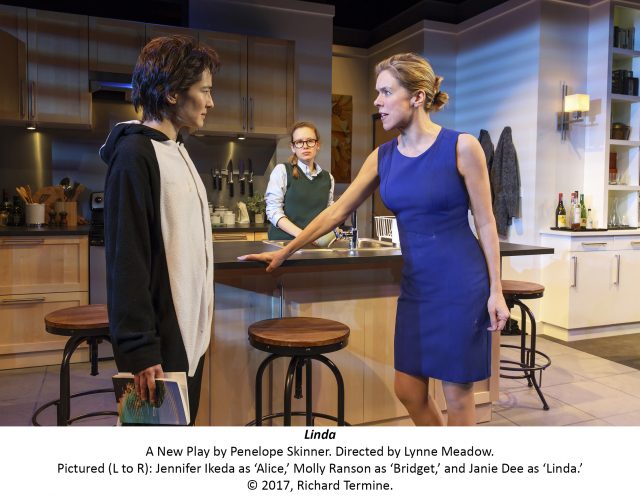 Linda, currently running at the Manhattan Theatre Club, takes the name of a single character, the protagonist of the story, but represents generations of women struggling with “new” feminism, one that encourages women to have it all. The play, written by Penelope Skinner, is rich with themes and delves into controversial and complex issues. However, the production directed by Lynne Meadow never quite finds its footing.

The story revolves around Linda, played by the iconic comic actor Janie Dee. Though there were a few dropped lines and missed cues in the performance I attended, Dee was captivating and completely believable as Linda. Linda’s children Alice (Jennifer Ikeda) and Bridget (Molly Ranson) struggle with personal problems. Her husband Neil (Donald Sahe MacKay) suffers from loneliness. In the course of a day, Linda’s world falls apart, much to the chagrin of her younger employee, Amy (Molly Griggs), who wants to usurp Linda. Add to the mix charming intern Luke (Maurice Jones) and sexist boss Dave (John C. Vennema) and you have the makings of what feels more like a sitcom  than a contemporary play.

There is a considerable amount of thought and money spent on the stage to reflect the play’s sensibility. The scenic design by Walt Spangler is clinical and clever, rotating like an office chair from one office to another to Linda’s home. It is the revolving door of Linda’s life and after two hours of going around with Linda, even we are left exhausted. The lighting design by Jason Lyons, using neon pinks and greens and blues, evokes the feeling of empty gloss, one that eventually traps all fighting for a place in corporate London. The video designer Ricco DiSanti uses video sparingly but effectively. Technically, the show works.

Yet, the cast never fully seems comfortable in the space of the set, and Linda ultimately suffers from the same problem the plot brings up – expectations. Whereas the women in the show, young and old, grapple with issues ranging from sexual harassment and ageism to casting and even self-mutilation, the production struggles to maneuver the tonal changes for a play that is essentially a dark comedy that isn't very funny. Though a play with so many stakes, innumerable conflicts and impossible to solve problems demands a level of charge, what is missed in Linda is a sense of quietness, a moment to take a breath from the revolving door of issues. That is until the end. The end, given the current political climate and the election, succeeds, even if the ending never quite feels earned.

Review: ‘Our Man in Santiago’
Review of ‘I Know Why the Caged Bird Sings&#...
Review of André & Dorine
Review: NY Classical’s The Importance of Bei...