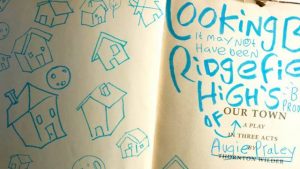 It doesn’t feel like too much of a stretch to say that everyone who did drama in high school found themselves in a production of Our Town at some point in their budding acting career (unless of course you did The Crucible instead). That’s certainly the case for the students of Ridgefield High in Augie Praley’s new play, Looking Back It May Not Have Been Ridgefield High’s Best Production of Our Town, an homage to one of Thornton Wilder’s greatest works.

Acting as on-stage narrator, a role which involves direct interaction with both the audience and the characters/actors themselves, Praley introduces us to the “gymnatorium” of Ridgefield High. A multipurpose room that has served as gymnasium and auditorium for many years, it’s about to be torn down after asbestos was found in the ceiling. To honor the gymnatorium, which housed countless memories, infinite friendships, and way too many productions of Our Town, Praley walks us through its history, not necessarily in chronological order, allowing us glimpses into the lives of the generations that grew up in its four asbestos-y walls.

The play kicks off with three couples sharing the stage simultaneously, though each occupies the gymnatorium at a different point in time. Celebrating its opening, Kara (Maya Jackson), the vice principal of Ridgefield High, shows off the new space to her partner Helen (Alesandra Nahodil), the school’s new drama teacher. Further down the line, Gus (Demetrios Saites) and Elaine (Emmy Harrington), two parents who just survived yet another viewing of Our Town, hunt for Elaine’s lost coat (Praley tells us they will decide to get a divorce by the time they find it). On the eve of the building’s destruction, Chris (James Fouhey), hilarious and fresh in his nervousness, prepares to propose to his girlfriend, as they met at their homecoming dance in the very gymnatorium that’s about to be destroyed.

Praley departs from these couples to explore their families, their friendships, their loves, hopes, and tragedies as lived out in the school’s gymnatorium, between productions of Our Town. Though a tad self-indulgent at times, especially in moments when Praley as narrator melded the story of the play itself with the story of his writing process, the play’s self-referential structure created a richly humorous tone.

Directed by Isaac Klein (who Praley assures us is not a character in the play, despite his many requests to the contrary), the performances hit the play’s comedic and tragic moments with impressive panache. As Hank, one of the fathers, Chance Carroll particularly shines as the center of the play’s tragic moments. Divorcing couple Saites and Harrington share the stage with Fouhey and his soon-to-be fiancée Olivia (Jenna Rush); the two performances balance each other perfectly, crafting beautifully bittersweet moments in Praley’s celebration of high school drama club, family, love, and Our Town.

Review of ‘Randy’s Dandy Coaster Castl...
Review of ‘Alma Baya’ at A.R.T./New Yo...
Delightfully macabre ‘The Wake of Dorcas Kel...
The Extremely Grey Line is a charming tour of Manh...