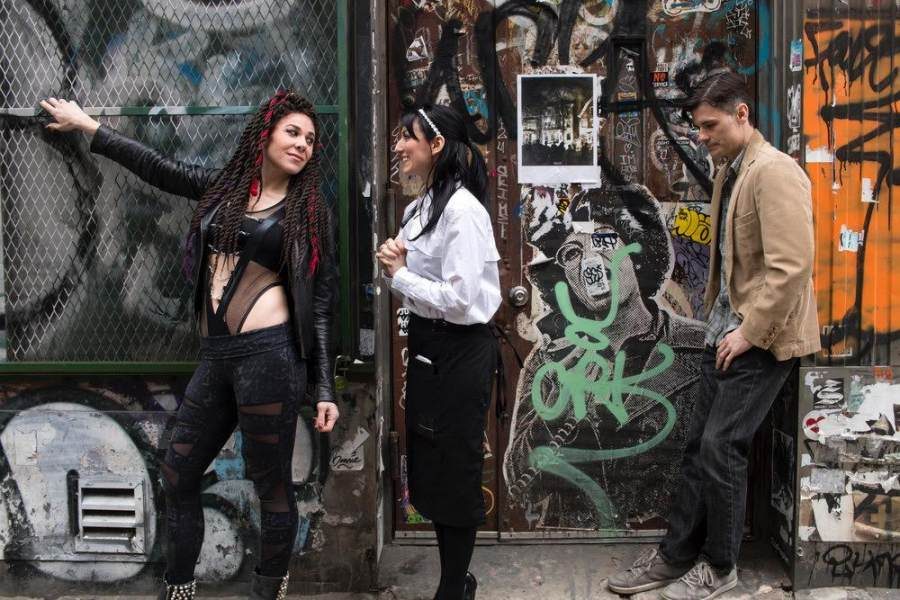 Siren's Den: A Rock Musical is a new rock opera that echoes All About Eve with a Sapphic twist. It is a realistic timeless tale told in a modern way.

Remy Morgan (show creator Rori Nogee) has arrived in big bad New York from the requisite Midwestern state of Ohio. She works as a coat check girl at the Siren's Den, a music venue reminiscent of CBGB, and that night gets the chance to meet her long-time idol, Skylar Cole (Lindsey Lake).

Skylar favors Remy by letting her into her world, and Remy finds the confidence to pursue her music career. She also begins a relationship with Skylar -- only to learn she is not the first one to fall for her, and that the others are still around.
I found the peripheral characters were more interestingly drawn than the core: Andrea Leach as Jessie, personal assistant/would-be girlfriend to Skylar; Chris Gleim as Logan, the talent scout who was once Skylar's singing partner, Adam R. Kaster as Garrett, Skylar's fiancee, and Ruben Navarro as the Bar Manager/Kurtis Katz. They all had a great stage presence and were very clear and engaging in portraying their characters.

Some of the singing was pitchy at times, though for Skylar's character, that seemed appropriate because she had that oh-well-don't-care punkrock vibe that made her so alluring in the first place. Other times, some female soloists were hard to hear over the chorus. The men all had powerful voices, in particular Chris Gleim as Logan. His duet with Skylar, "In the Meantime", was the best and most sincerely-performed song of the performance I saw.

Until they bring up modern ubiquitous social media, the show has the look, sound and feel of late 1980s/early 1990s New York, and would have completely worked set in that era as well. You do need some suspension of belief when characters reveal years-old deep dark secrets that anyone would find with a simple Google search.
The dancing is exquisite, by characters Skylar calls "the vultures" right to their faces. These are played by Jonte Culpepper, Lauren Chastain, Musa Hitomi, Frankie Shin, Erin Ullman and Corbin Williams. All stayed in character at all times and literally never missed a beat.
Event Info: