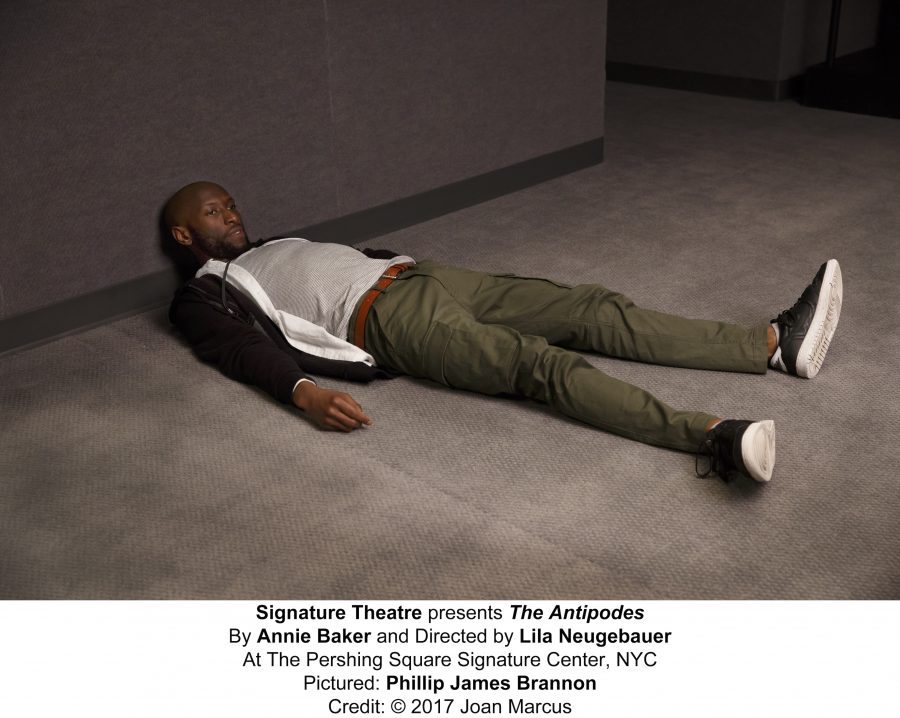 In her new play, The Antipodes, at Signature Theatre, Annie Baker once again uses the trappings of naturalism to tell a contemporary story that veers at times into the realm of magical realism. Clocking in at about two hours, this intermission-less play (sharply directed by Lila Neugebauer) is shorter than Baker’s Pulitzer-winning The Flick (2013) or John (2015), but it’s just as smart, engaging, and strange as those earlier works.

The action takes place entirely in a sterile corporate conference room in which a group of young-to-middle-aged people assembles to help create some kind of story under the supervision of a mysterious, guru-like figure named Sandy (the excellent Will Patton). On exactly what platform this story is to unfold is never made clear. It seems to be either a television series or a movie (or movie franchise), but it could just as well be some sort of graphic novel or video game. We do know that Sandy has had a stunning success earlier with something called “The Heathens.”

Most of the participants are newcomers, but two of them—played by Josh Charles and Danny Mastrogiorgio—have worked with Sandy previously and take considerable pride in their seniority. Sandy is clearly a big deal in the storytelling business, and his hires are being paid handsomely for their contributions. As they brainstorm, Sandy encourages them to tell personal stories. These range from “loss of virginity” tales to “biggest regret” anecdotes. The stories help us get to know the various members of the team as individuals.

As days pass, the group focuses increasingly on the nature of storytelling itself, and also on the nature of time. (Does it progress in a straight line, in spirals, or in some other way?) Baker plays with the time element herself by having the play’s action lurch forward by hours or days in ways that would be difficult to track were it not for the numerous costume changes made by Sandy’s assistant, Sarah (the very funny Nicole Rodenburg). On the periphery, taking notes on the proceedings on his laptop computer, is Sandy’s right-hand man, Brian (Brian Miskell), who has an odd fixation with sea creatures. The startling words and behavior of Sarah and Brian contribute to the play’s eerie, otherworldly effect.

If he’s a god-like figure, Sandy soon begins to invite skepticism from his adherents. Why does he have a strict no-cell-phone policy for the group during brainstorming conferences and yet interrupt sessions to take his own calls? Why is one member of the team (Danny McCarthy) seemingly ejected for voicing an innocent misgiving, in spite of assurances that Sandy fires people only for egregious behavior? More important, why does Sandy begin missing sessions, offering unlikely excuses for his absence? Eventually the group’s collective case of writer’s block transforms into a crisis of faith. The atmosphere becomes increasingly oppressive. Like exhausted Scheherazades, the team members—especially one named Adam (Philip James Brannon)—strive to keep the story ideas spinning to save their skins (or at least their hefty paychecks).

Production values for the show are strong, with Bray Poor’s sound design especially effective in a hilariously garbled videoconference sequence. The ensemble cast is fine across the board, but I especially liked Josh Hamilton as an earnest member of the team, who’s entangled in administrative red tape. Another standout is Emily Cass McDonnell as Eleanor, the team’s sole female participant. It’s Eleanor’s final speeches that lend The Antipodes’ gloomy conclusions about the future of storytelling a faint glimmer of optimism, and McDonnell manages to give them a sense of benediction.