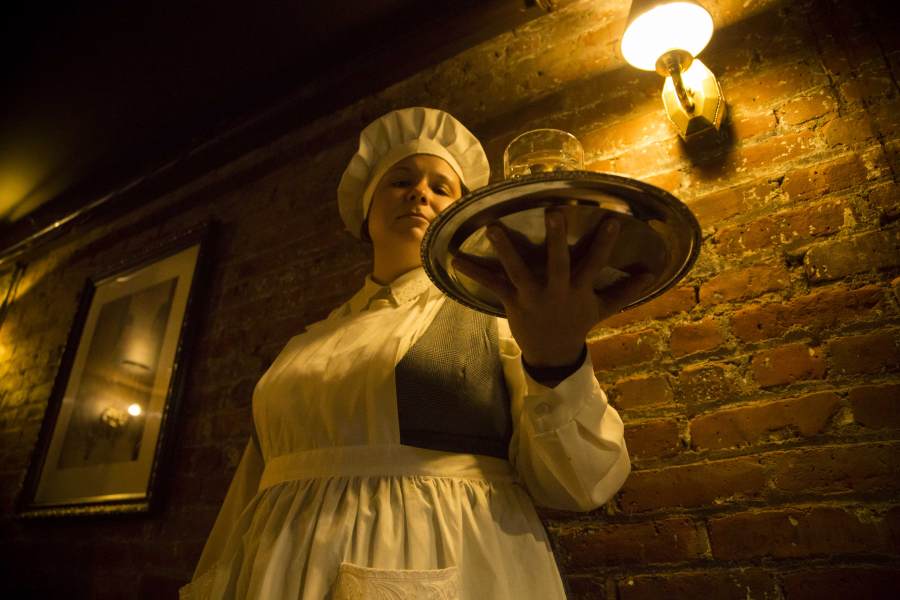 Created and written by Carlo D'Amore and directed by Collin Blackard, The Trial of Typhoid Mary 1915 is a fascinating, educational and emotionally moving experience.

Set in the lower level of Lucky Jack's on the Lower East Side, the play transforms the room, already outfitted to look like a room in the early 1900s, into a true time-travel experience. Every last actor is completely in character from the second their guests arrived to the second they leave.

An Irish cook offers you peach melba when you arrive, and you are greeted as esteemed guests at the benefit to raise funds for a local hospital.

It is a rotating cast, all of whom are skilled and highly energetic. Both D'Amore and Blackard wear many hats (sometimes quite literally). They reappear in various roles as it is revealed the Irish cook is Mary Mallon aka "Typhoid Mary", who has been ordered by the City of New York to stop cooking as she is an asymptomatic carrier of typhus. Mary thinks they do not know what they are talking about and continues cooking.

For the performance I attended, the charming Erin Bump played the maligned Mary Mallon, who is trying to make a living by cooking, the only marketable skill she has that earns her a decent wage. She has a friend in Desi Warren (Samantha Maurice, who also convincingly portrays a typhoid patient), the daughter of a household for whom Mary cooked, who cites that Mary was not sick and had in fact nursed them to health.

But Public Health official Soper (D'Amore), who has a book deal about Mary in the works, seemed determined to send her back to quarantine for the rest of her life. He cites the pattern of typhoid striking all the households for whom Mary has cooked, resulting in 51 people ill, three of whom died.

The guests are called to interview all of the various characters about their knowledge of the case. The lawyers then choose four people each, who question the various witnesses, including Mary, while Judge SS Goldwater (JR McCarthy) presides.

In the performance I attended, the jury found Mary "not guilty". It could go completely the other way in any performance. It is a clever game of chance, giving Mary the trial she never received in real life, several times over.

The real Mary Mallon spent nearly three decades in isolation and died alone of pneumonia, paralyzed by a stroke for the last six years of her life, in 1938. She was cremated and her ashes are interred at Saint Raymond's Cemetery in the Bronx.

Despite being a public health epidemiologist myself, I still teared up when Mary made her statement of being villainized and having her personhood taken away by her fellow man in the name of public health and safety. This theatre company gives her back her humanity and the compassion she did not receive from her fellow New Yorkers while still alive, and it is a truly beautiful thing. Bravo!