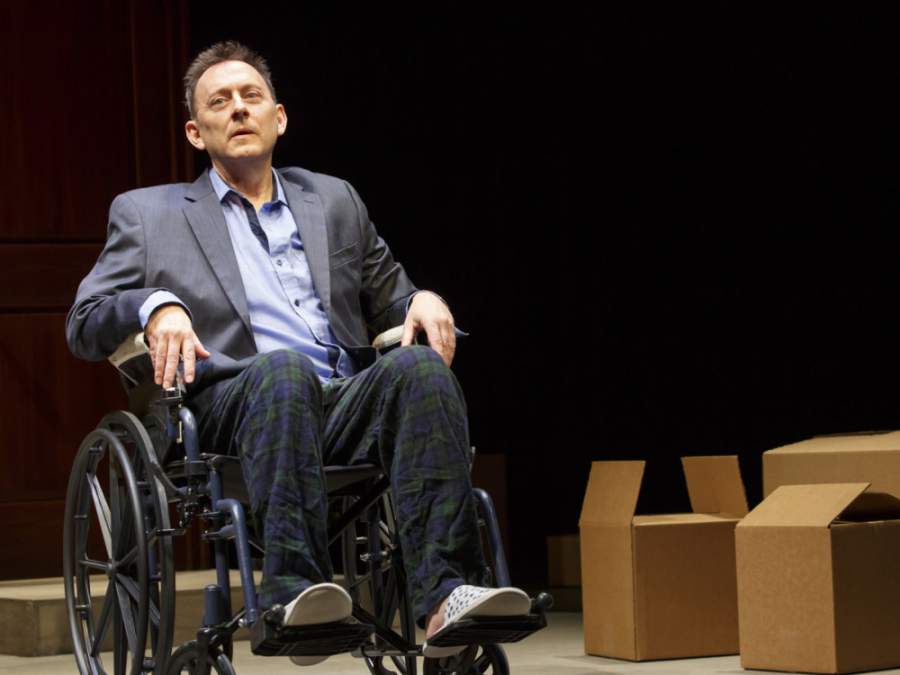 Signature Theatre’s world premiere production of Wakey, Wakey, written and directed by Will Eno, is an overwhelmingly joyous, moving, and unpredictable treatise on, well, death.

Michael Emerson, dressed in a suit jacket and pajama bottoms, plays our unnamed host and lecturer, an accidental expert on that looming formality -- “The Highly Expected Event.” Death: the special guest of evening -- not necessarily invited, but expected nonetheless, waiting in the wings for his cue. Death: packing for a trip, the destination unclear. Death: going to a party, knowing friends and family aren’t invited. Death: watching the approach an oncoming train.

Referring to note cards he pulls from a pocket of his wheelchair, Emerson's "guy" wrestles for meaning and chews over such metaphors, mixing meditation with observation while looking for clues and comfort in images, music and videos he calls up on a giant projected screen for all to see. He is humorous and hopeful, but constantly aware of time, stretching it and measuring it and marking it throughout the show. He is self-aware but steadfast. “This was originally going to be something else,” he tells us. “I don't know what it is, now. Maybe it's something called 'Elegy for the Eulogist.'”

It’s hard to describe just how closely we come to know and love this stranger over the course of the production. Emerson’s characterization shows us that he is in pain: his hand shakes and body quakes; he struggles to eat a sandwich, sip from a juice box; though he isn’t immobile, exhaustion leaves him wheelchair bound. But there’s so much about him we don’t know. We don't know his age, his religion, where his family is, if he has family, if he has money, who he voted for in the 2016 election. We don't even know, for sure, that he's dying. We don’t know for sure he's dying, that is, until he does.

With Wakey, Wakey, Eno and Emerson achieve a stunning feat, compelling an audience of strangers to deeply mourn the loss of a man who is not only a stranger but a fiction. We meet and laugh with him, and then we lose him, and the loss is felt even in the absence of the particulars that seem so important in life. Perhaps this is in part because Eno’s clever script, paired with Emerson’s oh-so-human performance, entwines the intimate and the universal. “It's important to honor the people whose shoulders we stood upon and fell asleep against,” Emerson offers, leading us through exercises in gratitude and memory, pressing us, lightly, to consider the ways in which those we love never leave us. In the absence of narrative, the plays moves forward through depth of feeling, anchored in quotidian touches of humanity, such as an iPhone charger that hangs, phoneless, out of a wall socket, a wall calendar with X’ed out days, the whir of a siren in the distance, word jumble games. As it happens, there’s a remarkable bond to be found watching a viral video of animals screaming.

January LaVoy radiates warmth and calm in her brief but critical role as a nurse who arrives to comfort us all, as the play builds to its multi-sensory conclusion. Wakey, Wakey is a truly great play, one that reasserts the unique power of theatre to create a space for catharsis and community building. You'll want to recapture the heart-bursting, life-affirming feeling again and again.