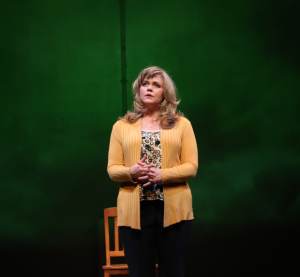 When Ginnifer (Ana Reeder) hears that her high school boyfriend Jason shot 12 people and killed four, including himself, she calls into question everything she knew about herself. After all, if she once loved someone who could go on to do something so unspeakably evil, what does that say about her?

It’s a question she at times seeks to answer and at times attempts to avoid in this 80-minute exploration of what it means to exist in proximity to evil. She walks us through the details of her night – though she won’t tell us what she ate in a 4AM trip to the kitchen – before revealing that, while she concerned herself with calories and late night wakefulness, her high school boyfriend got in his car, stopped for a donut, and shot 12 people before turning the gun on himself.

Such an opening makes for an intriguing premise, but ultimately, the play’s purpose feels as tangled and unclear as the “ball of yarn” metaphor Ginnifer invokes when attempting to untangle her own life. Her contemplations flit from Jason to another ex to her mother’s death without ever unveiling concrete links between them. This confuses the premise of the show by attempting to make sense of Ginnifer’s entire life without any real specificity to guide its speculations.

Her connection to Jason himself feels a little too tenuous – they only dated for five months 20 years ago, and the only time she saw him after that was in a brief moment at her mother’s funeral. Though her shock at the events is natural, and it is understandable that she would be affected by the news, her determination to insert herself into the tragedy seems more like a voyeuristic desire to be involved than the genuine mourning, shock, and guilt seen in his parents.

Ana Reeder’s performance, directed by Jonathan Silverstein, lends the play more nuance. Playing up the guilt and grief felt by Ginnifer, Reeder builds a convincing flow between the many topics she covers. She lends weight to the play’s most introspective moments, and when it returns to Jason and the shooting, she brings to life the emotional struggle of coming to terms with mourning the person to blame for a tragedy.

Review: How Does Keen Company’s Revival of A...
Review: Lonely Planet
Review: In the Blood
Review: ‘Our Man in Santiago’