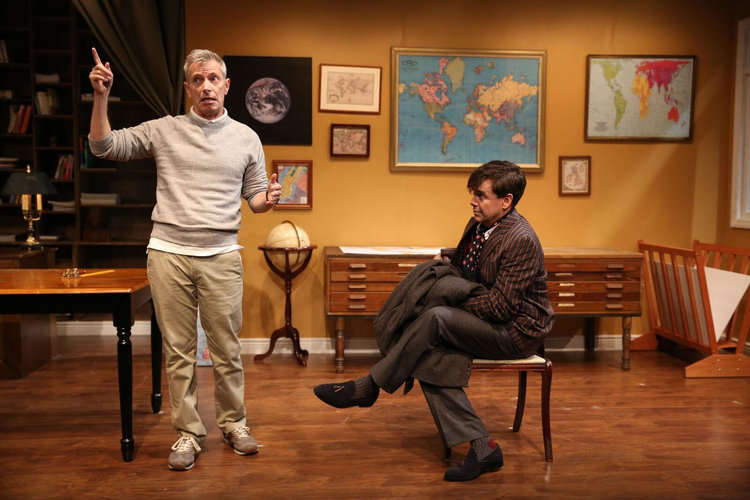 Presented by the Keen Company and set in a small map store on the oldest street in an American city, Steven Dietz's Lonely Planet is an intimate portrait of two friends at the height of the HIV/AIDS epidemic. In this play directed by Jonathan Silverstein, shop owner Jody becomes increasingly fearful of the world outside and the dangers it poses, refusing to leave his shop, while Carl, his spirited friend, begins filling the store with a variety of mysterious chairs.

Anshuman Bhatia does an exquisite job of making the set feel like home. On stage, there are maps on the walls and globes littering the shelves; a landline coil-wired phone and a typewriter help place us in time. The lights come up on a single chair onstage, and the quiet, reserved Jody appears. Played by Arnie Burton, Jody has heart in his kind expression, and he is instantly likable. The chair itself is a mystery: Jody mentions the its existence but never quite explains the reason behind it. And yet, within moments it becomes the center, both literally and figuratively, of the play.

From the moment he bursts onto the stage, the character of Carl, played by Matt McGrath, captures hearts. He's loud, energetic, flamboyant, and eccentric, and he immediately draws all of the attention in the room. From that moment in, the audience is swept up in this world and the extremely touching unlikely friendship between these two men.

Carl is a curious character, one I could watch hours upon hours of plays about. He creates lives for himself, lying to Jody about what he does for work and filling the map shop with his tales on the job as a tabloid reporter or an art restorer. The audience is always left wondering just what Carl's deal is, and when that is revealed in the second act, through a heartfelt monologue Carl makes about his friends who have died of AIDS, it is even more heartbreaking than we expect.

Throughout the show, the chairs multiply, more and more brought in by Carl, and the reason behind them is revealed toward the end as well. The symbolism of the chairs building in the map shop speaks far beyond their physical existence. As the play progresses, Jody gets more and more angry about each chair that Carl brings, wedging tension between them and creating roadblocks in their relationship. Meanwhile on stage, the chairs create physical blockages that the two men need to climb over and around in order to reach each other or to navigate the set.

The final scene is the most heartfelt of all, showing the role reversal that has occurred through Jody's character development and Carl's unfortunate circumstances. The contrast in the men's characters is still there, but it has done a complete 180. This heartbreaking turning of the tables is the way the play ends, leaving questions hanging and not a dry eye in the house.