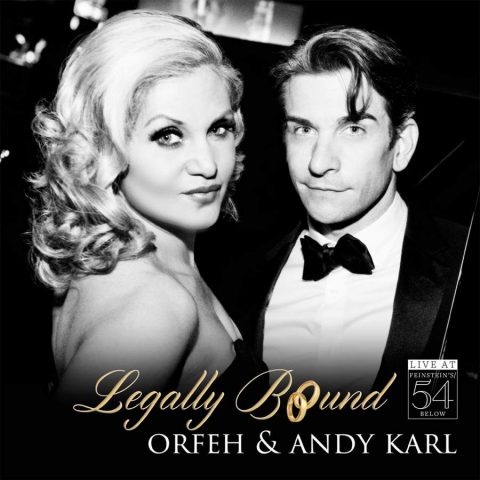 In December 2016, one of Broadway's hottest power couples took the stage at Feinstein's/54 Below for a series of concerts they called Legally Bound. Orfeh and Andy Karl first met in Broadway's Saturday Night Fever and have since married, performing in shows together and separately for over 16 years. One of their most notable shows together is Legally Blonde the Musical in which Orfeh played quirky hair stylist Paulette, earning her a Tony nomination, and Andy played her hunky love interest Kyle (the UPS guy). Andy has earned a few Tony nods himself, for the title role in Rocky the Musical in 2014, his role as Kristin Chenoweth's love interest Bruce Granit in On the 20th Century in 2015, and most recently for the role of Phil Connors in Groundhog Day the Musical, which he can be seen in now.

The couple took the stage to perform songs from some of their favorite musical genres, as well as selections from shows they have done in the past. The concert has now been preserved in the form of this album, which will undoubtedly be the soundtrack to the lives of Broadway fans for years to come.

The album begins with a rendition of "You're All I Need to Get By," originally by Marvin Gaye and Tammi Terrell, which is the perfect track to start with, immediately showing off the couple's perfectly blended harmonies. From there, we are thrown into a killer motown mashup of the hits "Ain't No Mountain High Enough" and "Ain't No Stopping Us Now." The transition is flawlessly executed and the songs fit more perfectly than I could've imagined. There is a beautiful contrast between Andy's lowest low notes and Orfeh's highest highs that make this mashup not only beautifully sung, but interesting to listen to as well. Plus, there's an added bonus of hearing Mr. Andy Karl rap, which is something I think we all needed more of in our lives after the hit YouTube sensation Bustle Fluffah (look it up, you won't regret it).

Andy then displays his gorgeous range with his rendition of "The Promise" by When In Rome, which he declares as a throwback to the '80s pop music he listened to growing up. I've listened to just about every cast album Andy sings on, as well as hearing him perform live many times, and this track is easily the best I've ever heard his voice. It's smooth as butter, while still raw and real, and the emotion is palpable.

Then it's Orfeh's turn to show us what she's got. The next song is a mashup between "Make Like a Nail" from The Great American Trailer Park Musical, an off-Broadway production in which Orfeh was in the original cast, and the Elvis hit "If I Can Dream," which was featured in the off-Broadway show Hunka Hunka Burnin' Love, which Andy was performing in at the same time. Right off the bat, Orfeh is hitting us with her killer riffs, which she does better than anyone in the business. Her range is insane, hitting growly soulful lows, all the way up to expertly executed highs, and every single time she came in with a riff from nowhere I was more and more impressed.

From here, the duo slow it down with an acoustic One Direction song called "History," before Orfeh returns to slay once more with Whitney Houston's "I'm Your Baby Tonight." She notes that it's a difficult song multiple times, but she could've fooled me. Her energy is electric, and combined with the powerhouse vocals that I could go on about forever, this track is very easily one of my favorites on the album. I'm already looking forward to listening to it again.

Andy then takes the mic to sing one of his solo songs from Rocky the Musical, the show in which he played the title role that earned him a Tony nominated in 2014. The song, "Keep on Standing," is one of my personal favorites from the musical and Andy proves that he's still got it, belting out the rock anthem with his signature Rocky growl.

Next Orfeh takes on the Janis Joplin hit "Piece of My Heart," which has been done many-a-time but never like this. There is endless emotion in this performance, and this woman is a riff queen, there is nothing more to say. Andy comments that that performance happens in his living room at least twice a week, and I've never envied him more.

The penultimate song is "Seeing You," a track from Groundhog Day the Musical. It's no secret that this show is one of my favorites this season, and honestly of all time. I gush about it constantly. Tim Minchin's genius shows through in this song, and Andy's vocals compliment it beautifully. In this show, this song plays a bit like a duet, with the ensemble providing backup vocals. However, this performance is done in the style of a solo, with Andy standing alone at the mic and delivering the song directly to the audience. It plays beautifully, the emotion is raw and real, and I must say that out of all of the times I've heard Andy perform this song, this one is my favorite.

The album closes with the couple's rendition of "Prince's Kiss," a crowd-pleaser and a wonderful way to end the concert and the album. Orfeh leads the vocals but Andy provides his lovely harmonies. The two introduce their incredible band mid-song, and Orfeh puts it all out there, belting the ending up the octave and leaving the audience cheering.

The entirety of this album is done beautifully, translating an undoubtedly magical performance expertly to an audio format. The couple showcases their best performances, proving once again that they deserve to be recognized among the ranks of Broadway's best.

Orfeh & Andy Karl: Legally Bound – Live at Feinstein’s/54 Below will be released digitally and in stores on Friday August 18, 2017. The album is currently available for purchase at www.BroadwayRecords.com.