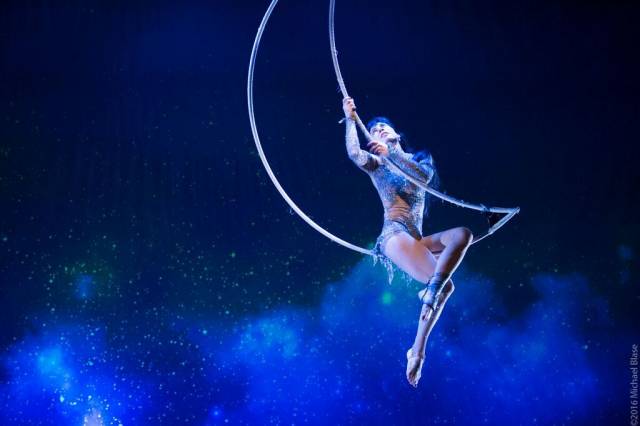 Described as a Latin Cirque du Soleil, the contemporary circus troupe Circo de la Luna is deserving of a longer run and a wider audience. At their brief run at Baruch Performing Arts Center, April 20-22, people of all ages were blown away by the magnificence and magic of this production, a kaleidoscope of circus artistry and aerial bravery.

The performance featured acts by contortionists and aerialists, clown-comedy, vaudeville, flamenco, tango and salsa dancing, all with a celestial theme as its backdrop, intertwined with the story of a disgruntled New York City dweller (our Clown played by incredibly talented Mark Gindick) who receives a mysterious package in the mail. He is then magically transported to Spain, Cuba, Argentina, and beyond, on a quest for love and a less rigid life than the one he experiences in his crowded metropolis. Lavish projected architectural images created by photographers Thierry Dehove and Marc Goodwin transport us to these Latin cities where the story takes place.

The obvious years of commitment, training and dedication all culminated into electrifying performances by the artists, strong, fierce, and passionate. Sonia Olla commanded the stage with her mastery of Latin dance, taking us with her into a passionate frenzy. The remarkable contortionists Olga Karmanski and Anna Venizelos were spellbinding, their fluidity making you question where reality ended and hallucination began. The strength of the divine aerialists Sarah Sophie Flicker and Amanda Topaz, swinging in slow motion upon a crescent moon or hanging from a long length of fabric with jaw-dropping elegance, will stay with me forever.

Impressive, too, was the old world entertainment provided by the mysterious cowboy in black (Angelo Iodice aka AJ Silver), who thrilled with his sexy prowess with the Boleadoras, ropes with weights attached used to catch cattle by entangling their legs. And Ismael Fernandez left his soul on the floor of the stage and his audience breathless with his fiery singing.

This was a circus beyond the traditional sense -- charming, bold, funny, intense; a melting pot of ethereal magnetism. A satisfying feast for all the senses, it's the sort of show that everyone needs to see.