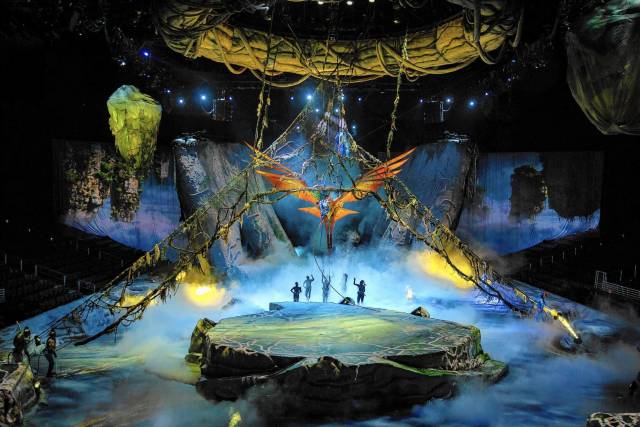 Inspired by James Cameron’s epic 2009 fantasy/sci-fi film Avatar, Cirque du Soleil’s new touring show Toruk brings a performance unlike any other to the stage at Barclays Center. Infusing elements of both a standard Cirque du Soleil show and the narrative of the film, Toruk plays out like an epic children’s fantasy story complete with energetic acrobatics, mind-blowing contortionists, soaring aerialists, and jaw-dropping puppetry.

The Na’vi are a diverse people who inhabit the moon of Pandora, with five ancient tribes who all live separately but harmoniously. When a large winged creature called the Toruk threatens their existence, it is up to two boys from the Omaticaya clan, Ralu and Entu, along with their Tawkami friend Tsyal, to stop the treacherous beast from destroying the sacred Tree of Souls. The titular Toruk is an evil but majestic creature, a cross between a dragon without the bad breath and a sort of multi-colored Jabberwocky.

The entire team of Toruk has done an amazing job putting it together, especially for such a limited run. Writers/directors Michel Lemieux and Victor Pilon have crafted a rich and gorgeous world along with a team of 13 under the artistic guidance of Guy Laliberté and Jean-François Bouchard and a cast of dozens clad in blue skintight costumes (Kym Barrett). The set is nothing short of magical (Carl Fillion), with large trees gleaming with lights, moving set pieces that unfold like balloons, and an impressive centerpiece that lowers up and down to allow for the myriad aerial performers.

Patrick Martel designed the incredible puppets, including the unique Toruk itself. Choreographers Tuan Le and Tan Loc and Acrobatic Performance Designer Germain Guillemot have coordinated the large cast wonderfully, allowing them to seamlessly and constantly move about the immense stage. The original music by Guy Dubuc and Marc Lessard (aka Bob & Bill) is beautiful and showcases Cumie Dunio’s powerful voice as the Shaman of the Omaticaya clan.

The sights and sounds of Toruk are impressive. There is even an interactive element that occurs when users download an app to their phones that causes the phone to light up, creating a strobe effect. Narrated by a mysterious old Na’vi man, the storyline is very accessible to children. In fact, adults may find it a little too juvenile. However, the imagery is enough to sustain even the most seasoned theater-goer.