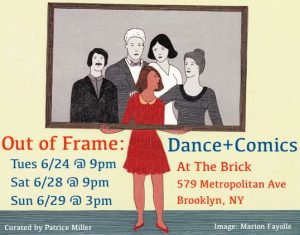 Tuesday night, as part of the Brick’s ongoing Comic Book Theater Festival, Patrice Miller presented Out of Frame: Dance + Comics. The play was a choreographed, interactive look at the fun side of comic book favorites as the performers twisted, tangoed, and two-stepped through the drama. With the illustrious Patrice Miller at the helm, Out of Frame was an interesting and unique experience in dance, drama, and comic book theater.

As a collaborative visual art piece by six different choreographers, Out of Frame achieves symbiosis through their cast chemistry, and by making the choreography relevant to the story. Whereas most pieces of theater that involve dance use the art form as an accessory to the dialogue, Out of Frame uses dance as the dialogue. From arabesques to isolations to quicksteps and back, each sequence provides a story to be told through movement, much like the alliterative nature of comic book syntax brought to life.

Some of my favorite scenes from Out of Frame include the superhero love dramedy "Rise of the Triple Helix" by Shana Solomon, who used jazz theater and Broadway style choreography to tell portray the love triangle between The Rubber Maiden, Captain Crush, and Mr. Marvelous. Even better was Emma Cotter’s “HCI: High Claim Item”, which was like Ocean’s Twelve with former Cirque du Soleil members. Also involved in the project were Alexis Thomason, Hope Cartelli, and Chris Chappell, who make up Out of Frame’s eclectic and diverse sequencing.

The show will run this weekend at The Brick with two last chance opportunities for audience’s to catch a Saturday (6/28) evening show at 9 p.m., and a Sunday (6/29) afternoon show at 3 p.m.