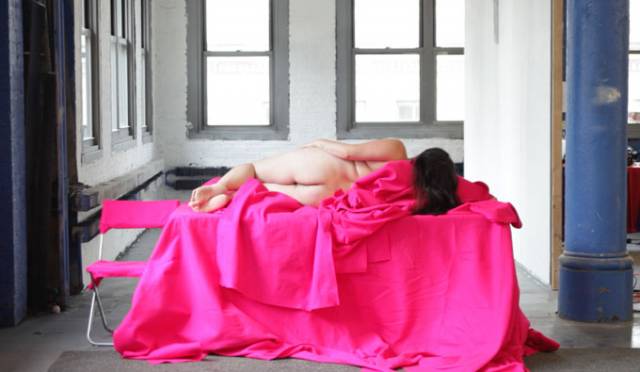 A New York Live Arts off-site event, Jen Rosenblit's Clap Hands is a poetic and daring exploration of containment, the body, and performance. In collaboration with Effie Bowen and Admanda Koblika, and with supportive performance from alexia welch, Rosenblit questions the lines that encase, connect, and separate, as The Invisible Dog Art Center in Boerum Hill, Brooklyn is transformed by a sculptural mass of shapeshifting, fuchsia-colored felt.

Sitting at a bright yellow table that is covered in audio equipment, Rosenblit, in black boxing shorts, a black crop top, and black boots, speaks poetry into a long, fuzzy, grey microphone, held by welch. Taking on the tone of storyteller and setting the mood, Rosenblit closes her eyes, shifts her elbows on the table, and looks out at the audience, saying things like, “I'd like to know where we are if we are not together” and “I just barely recall you, any of you.”

The structure of the performance space is formed by a large rectangle of metal, bleacher-like benches where the audience sits. Rosenblit plays with this seemingly stationary parameter when Koblika, in a yellow wrestler's unitard, steps beyond the bounds of the audience, opens a window, and walks around in a yard adjacent to the building. Movement is ambling as Bowen, in an all-white fencing ensemble, simultaneously begins distributing a giant stack of folded, fuchsia felt around the performance space. Paired with Rosenblit's words on departure, a feeling of change, loss, and what is left behind permeates.

From the mountain of fuchsia felt, Rosenblit emerges completely naked save for her black boots. Positioning the yellow table at a diagonal, she lays on it, performs a rendition of the reclining nude, along with a variety of other poses, playing with exhibitionism and pushing at the lines where the body is examined in a performance. From her earlier text: “she would be without clothes. Next to nude. Just so you could see the subtle shifts, the unnoticed.”

As the piece comes to a close, the performers begin wrapping all of the props in the fuchsia felt. The mic gets wrapped in the fuchsia; a beach ball gets wrapped in the fuchsia. Rosenblit casually sits on one of the benches, still naked, alongside the audience, and nonchalantly wraps a yellow mouthguard in the fuchsia. As this movement is displayed as almost routine, we are left to consider that which forms, connects, and separates all things—ourselves, others, matter. A piece that successfully balances humor, eroticism, and reflection, Clap Hands is an extraordinary study on the body, movement, and the fabrication of experience.

Lori DeGolyer is a Brooklyn-based writer.