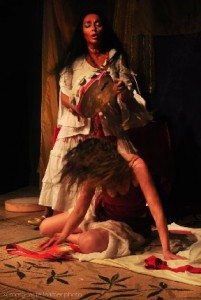 Voices of the Tarantate is an original piece written and directed by Alessandra Belloni. This dance-opera tells the story of Belloni’s internal healing, and how she then shared that with others through the “tarantalla,” the spider dance. In honor of Domestic Violence Awareness Month, Belloni performed with the Daughters of the Cybele to share stories of women’s abuse and healing.

Even though all of the songs were not in English, one could still feel the emotion from them. One that stood out was "Nia Nia", which involved a cradling motion. This Greek song was from mother to daughter, saying that her father will not love her as much as he should because she was a girl. The women danced and sang different stories of love and loss. At the end of the first act, the Rhythm of San Rocco and the Black Madonna of the Sea joined the women together to begin to soothe their sorrows.

Where Act I was about the call for healing, Act II was about celebration. The dances and music in the second act transformed into a more jubilant spirit. The women honored different goddesses, such as Cybele (Mother Earth), Isis (Goddess of Fertility and Motherhood), Yemanja (Mother of Oceans) and Aphrodite (Goddess of Love). The first dance, the Tarantella Di Ogliastro, was an exorcism to remove evil spirits before the celebration.  The dancer that embodied the goddesses danced with fire and swords, handling them with grace, elegance, and sensuality.

Voices of the Tarantate was not only about sharing and healing, but it was also a reclamation of the power that women once held in society.