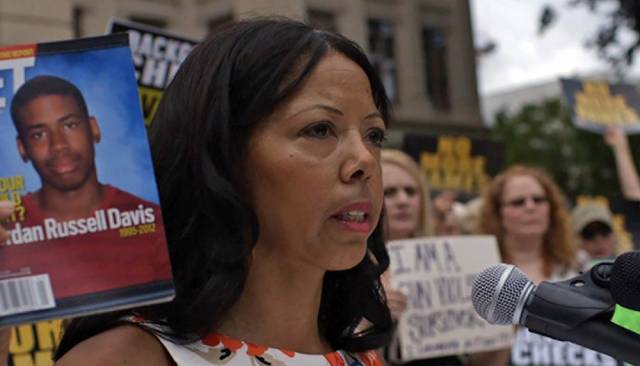 Despite the pain and anguish relatives of the deceased will experience during a murder trial, our societal fascination with crime endures. Perhaps this is because the procedural aspects of solving a mystery are quite similar to telling a story. The narrative reveals itself little by little, until a conclusion is reached. 3 ½ Minutes, Ten Bullets is no exception, and it is a detailed look at a single case of what is widely perceived as a systemic issue. Prophetic in its focus (the documentary predates the Michael Brown case and subsequent Ferguson protests), the documentary examines the murder of Jordan Davis – an unarmed black teenager shot and killed by Michael Dunn in 2012.

Early in the film, the character of Jordan Davis is presented to us by way of several interviews with friends and family. These introductions instantly humanize Jordan to the audience, and evoke a tremendous sense of pity. Other than these few brief inclusions, around 75% of the film is comprised of actual footage taken at trial. At first, this seems a bit hyper-focused and lacking in dynamic, because so much of the film is just lifted from trial testimony and procedure. However, stitched together, the flow of the trial does lend itself to the telling of Jordan's story. After the defense attorney cross examines Jordan's friends and tries to make them appear to be intimidating "thugs," we cut to footage taken by documentarian Marc Silver of the same boys horsing around on the basketball court as evidence to the contrary. This disputation is actually quite impactful, and, as a result, the character of Jordan becomes less of a mystery. The editing choices felt effortless, logical, and inevitable. Jordan's case tells itself, and this hands-off approach feels particularly respectful and sensitive to the subject matter as well as all of the people involved with the film (including Michael Dunn and his perceived guilt/innocence).

As an individual work of documentary film, 3 ½ Minutes, Ten Bullets, is not a masterpiece. It presents a very straightforward subject clearly and concisely, but doesn't do so in any particularly interesting ways. Including statistics about the murder rate of unarmed black men, or even investigating the stereotypes that might be at the root of this disheartening pattern would have made a nice complement to the frustrating trial of Michael Dunn. Still, Jordan Davis's story is one that demands an audience nevertheless. The murder trial is compelling and troubling in and of itself, and while the film itself isn't necessarily extraordinary, it certainly is important.