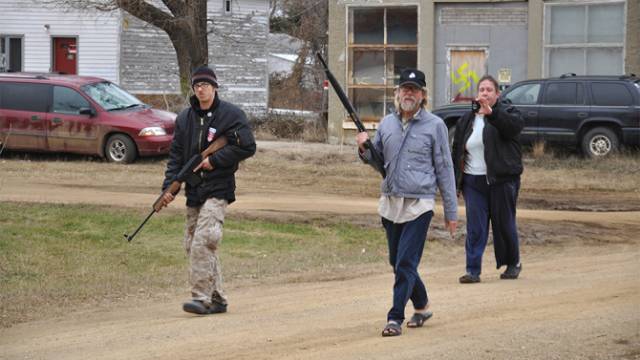 Part documentary, part thriller, Welcome To Leith paints a fascinating portrait of a desolate little town in North Dakota, and how in 2012 a group of white supremacists attempted to convert the town into their own private settlement. Much in the same way that The Jinx is driven primarily by interest in a single figure, so too is Welcome To Leith. The film centers its attention on Craig Cobb, who moves to North Dakota and begins buying up property.

While the act of buying real estate seems innocuous, the film is edited such that Cobb's encroachment seems utterly terrifying. Abrasive, atonal, music is set against stultifying shots of what essentially looks like an abandoned wasteland. And yet, Leith is home to 24 well-meaning and caring residents. We get the sense that these people have opted to live in this community for its seclusion, peace, and sense of togetherness. This same sense of peace and seclusion is what is threatened by Cobb's aggressive agenda.

Craig Cobb, one of the country's most notorious white supremacists, is portrayed as a truly horrifying figure. His disheveled appearance, and oft dead-eyed stares into the camera display a flicker of madness that so strongly make you fear for the residents. The film includes an unpleasant highlight reel of his previous stunts, many of which he filmed himself. In fact, it's worth noting that there are no reenactments whatsoever of what took place in Leith in 2012 – all of the footage is more or less in "real time."

Arguably the most confounding thing about the film, is how it never really sides with anyone. The assumed "villains," are undoubtedly the loud-mouthed, dead-eyed, white supremacists. And yet, they are treated pretty fairly in spite of this. Even more bizarre, is the perceived perspective of one of the white supremacist families trying to settle in Leith – which actually sounds completely reasonable if you were to remove the context of their hatred. The woman says, "No one has any right, no matter who you are or what you believe in, to make you leave just because they don't like you." So while the legal struggles and court cases are all interesting to see, the most compelling part of Welcome To Leith is actually the ability to see how the extremist mind is able to actually contort itself into believing that it is a victim of hatred.

The filmmakers' priority is seemingly just to document – to capture as much footage of the controversy – and its potentially violent central figure – as possible. However, an emphasis on how easy it is for extremist groups to hide behind the 1st Amendment seems to be the central focus, and it indeed is fascinating to think about. Can America institutionalize tolerance, and if so, does that tolerance include hate groups? Ultimately, Welcome To Leith, sort of fades out  rather than punctuates any powerful conclusion in the last 40 minutes (the most climactic of action takes place about half-way through the film). This doesn't make it any less interesting, and the filmmakers are keen to not get in the way of the storytelling with flowery camerawork. It's an entertaining film that explores the manifestation of racism and intolerance in a series of events that seem too far fetched to be real.