September 2, 2015
Film
Review: The Black Panthers: Vanguard of the Revolution 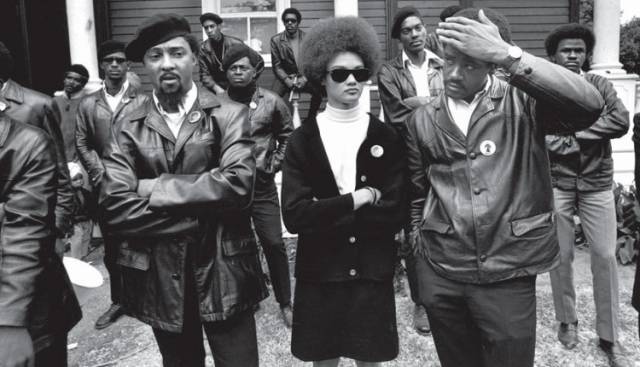 The vast majority of Americans have some understanding of The Black Panther Party. Violence, revolution, police brutality, and racism are each in some way linked to the story of the Panthers, but these concepts alone fail to bring the movement to life. What's remarkable about The Black Panthers: Vanguard of the Revolution, Stanley Nelson's documentary about the organization, is its ability to do just that: to bring the entire movement to life in vivid detail. The film's opening metaphor acknowledges the mystique of the Panthers, by relating the party to a tribe of people surrounding an elephant. Each individual person's position in relation to the elephant will be different in some way, but each experience is tactile, vivid, and true.

Learning about the Panthers from the inside necessitates a large volume of testimony, and Nelson does this in a way that is palatable and easy to follow. These interviews with members of the party are more than just talking heads, but are introductions to real people. An ensemble cast of characters who each have some unique relationship to the metaphorical "elephant." These vignettes are carefully placed, too. For example, there's Huey Newton, a charming and charismatic founding figure whose charm and charisma later become a focal point of a media frenzy when he is the first (of many) Panthers to be unjustly persecuted. Imagery of protesters donning the message "Free Huey!" become much more emotionally impacting once the audience has been introduced to the personality of Huey. In short, there is a careful indoctrination of characters and major players that strengthens the story of the Panthers and makes it effortless to follow.

In a way, this is also testament to the skillful editing of the documentary and it's well structured approach. Moments of genuine humor and comic relief are reinforced with excellent B-roll that amplifies this effect. Then, a shocking or heartbreaking twist to the story creates a stultifying and profound effect on the viewer. The most impacting of these moments is a detailed recollection of what is essentially a massacre by police, which spins the already frightening police-Panther conflict into a truly horrifying place. The film's focus on cause/effect (rather than chronological order, necessarily) makes each major Panther event feel like a logical progression from the last.

Particularly in this case, these strengths of the medium ensure that the film's message is clear. To obsess over the technical feats of this documentary and praise its ability to entertain, is to miss the entire point. To some, revolution is a fantasy. But to the strong personalities of this film and the party at large, revolution was the only choice. Nelson's documentary is incredibly timely, and upsettingly so. It is also, however, compelling evidence that this society has a lot of work left to do to distance itself from the 1960s, and simultaneously, that it can all be done.