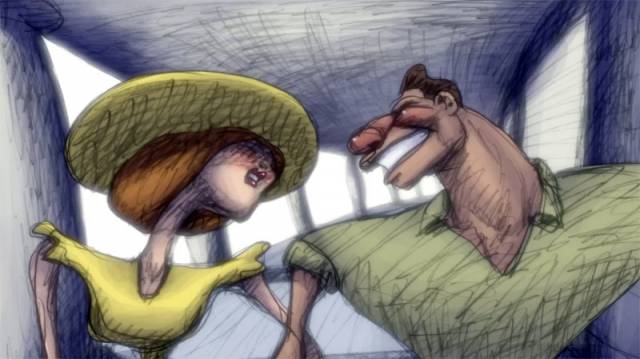 Bill Plympton’s Cheatin' supercharges the often cliché plot of extramarital affairs and turns it into a bold artistic statement. If you want to watch imagination soar to heights of unabashed grandeur, look no further as indie’s most intriguing animator once again mesmerizes. An attractive woman, Ella, wanders into a carnival where she is coerced into riding bumper cars. An accident occurs. Her electrocution is imminent until a preternaturally handsome stranger, Jake, saves her from impending doom. Flash-forward and they’re married, happily, until a woman takes a photo of Ella as she tries on dresses in a room full of male mannequins. Jake is shown the photo, believes that Ella has been unfaithful, attempts and fails to commit suicide, and instead goes on to have multiple vengeance affairs. Ella finds out about his debauchery and hires a man to kill Jake, which fails miserably. She stumbles upon a once-famous performer who finds a way to transfer her soul inside the bodies of the women Jake ruptures mattresses with.

The atmosphere that Plympton generates is pitched perfectly to his own personal register, a register infused with humor, heartbreak, sexuality, and sublime imagery. There is no dialogue, so the film’s sound comes from the effects and music. The score, rendered wonderfully by Nicole Renaud, is at times operatic and at times calls for whimsy from the likes of “The Can-Can.”  Totally throwing away any semblance of human proportion, the visuals absurdly elongate the characters’ bodies, similar to how Picasso elongated his subjects' bodies to make them more evocative, than merely realistic depiction. When all of these elements come together, what you have is a plot that takes a backseat to the imagination. Plympton’s energies lean towards an expressive rather than narrative engine, a film that is more poetry than prose. Some of the images are jaw-droppingly beautiful. In one scene, a fissure quakes its way in between Jake’s and Ella’s bed. Jake’s side of the bed levitates, an indirect and effective way to depict a rift in their relationship.

The film is fueled with a pulse that beats from a true original. The highly stylized feature may find detractors, but even they can’t deny Plympton’s highly inventive mind. That’s not to say the film is without its flaws, however. The film was mostly based on a sense of concreteness that is distorted into surrealism, kind of like how Pablo Neruda wrote many of his love poems. But by the end, Plympton takes a page out of Arthur Rimbaud and makes the concrete events of the movie surreal by introducing the Trans-Soul Machine. This inconsistency is slightly irksome. The hyper-lofty surrealism should have stayed as the characters’ fantasized abstractions instead of becoming physical. Even then, the film is a dream carnival that demands attention. It takes incredible risks that many animators would never be brave enough to attempt. Cheatin' is a marvel. If you give in to the film’s charms, it will sway you. Surrender and enjoy.