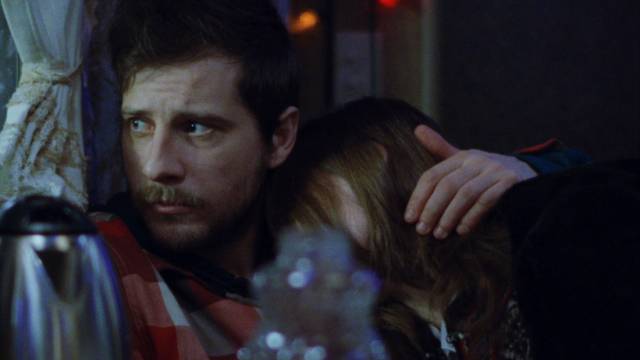 The suitably named Noel (Kentucker Audley) descends upon NYC every year to sell trees. His plaid jacket and colorful lights strung about the premises add a sprig of joy in an otherwise drab, mundane, and of course, cold environment: cement sidewalks under the slate December skies of Brooklyn. Noel sleeps in his trailer by day - he’s convinced his gruff boss to let him take the night shift - and barely warms up before he must return outside and help customers, of which there are few so late in the night. Christmas, Again gives us a look at a day-in-the-life of someone who must contend with Christmas cheer in the midst of his own troubles.

The camerawork (Sean Price Williams upholding once again the power, possibility, and gorgeousness of 16mm in the digital age) concentrates on Noel, a constant presence in the frame, appropriately wobbly at times, and always ready to curl into a ball in his trailer bed, which at first is occupied by the daytime salesman (Jason Shelton) and his girlfriend. Noel's annoyance with them is at once slight and apparent, but also understandable; besides manual labor weariness and shiver-ready temperatures, there is the added envy at the sight of coupledom, triggered by his lingering dejection from a breakup that is made known in small pieces throughout film. A picture here, a line there. It is all in the details, and first time feature director Charles Poekel is a keen at doling them out. Another interesting one: an Advent calendar doubles as pillbox supplying Noel his nameless meds. His growing gloom is never overwrought or inflated, but treated with sensitivity and candor by Poekel, who, like another microbudget filmmaker, Andrew Bujalski, proves highly attuned to the tenor emotions without screaming them out loud. Noel is a quiet depressive with a hurt puppy quality and an almost whimper of a voice, captured perfectly by Audley in a dialed-back performance that reveals a nervous fragility with those around him.

The question of a disgruntled customer or potential argument over trees persists, and is answered when unexpected by a swift sucker punch, but the scene leaves the viewer with a puzzled chuckle rather than aghast. Just one of those things. Single-incident aside, those that Noel encounters are harmless, perhaps even friendly; many of them repeat buyers making a point to buy from him again. Even a persnickety customer, after a shouty relay to someone at the end of his Bluetooth, ends up politely purchasing a tree. Noel, too is perhaps surprised at this kindness of strangers, through which he is able to muster up a little strength or occasionally a smile.

The most important person Noel meets, however is not a customer, but a young woman he finds unconscious on a park bench and lets sleep in his trailer. Played by Hanna Gross, grounded and magnetic, she is a realistic presence that gives him a glimmer of hope without being an end-all, saving grace. Christmas, Again is categorically not a romance. Poekel defuses that thought early on, as she comes and goes, but what he captures is better: kinship and hope with home-spun warmth. What better tidings than these?

Christmas, Again will be available on SVOD on Fandor, or on iTunes and other platforms on December 3rd.