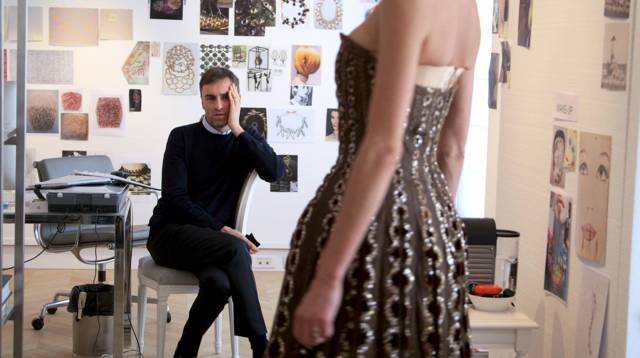 Fashion fans will immediately get sucked into Frédéric Tcheng’s Dior and I. For everyone else who doesn’t keep up with the absurdly decadent fashion culture, watch this film for a well-shot directorial effort and an inside look at the debut haute couture collection from the latest successor of Christian Dior. Raf Simons, the heir designer to the prestigious Dior tradition, has eight weeks instead of the usual four to six months to prepare for his debut. While not exactly a race-against-the-clock thriller, the time pressure does leave you wondering whether Simons and his trusty sidekick, Pieter Mulier, will be able to dazzle the fashion world with a collection worthy of the influential brand. Add into the mix that many of those hired to put together the collection don’t speak fluent French (Simons, although Belgian, can’t), and you have a struggle on your hands.  At least they are armed with a dedicated staff of tailors. A few of them have been working in the atelier for thirty to forty years and their array of personalities propels the motion of the movie forward.

As all of this hullabaloo runs its course, we are treated to the history of Christian Dior, a man who considered himself a reactionary but became regarded as a revolutionary. His vision of women’s clothing, from the conventional square style of World War II to a shapely and sensuous style that still pervades the modern era, put Paris at the forefront of fashion on the international stage. Throughout the film, Simons continuously broods about the Dior legacy and his role in creating a modern and innovative look, even influenced by Sterling Ruby, a modern painter. Simons’ discerning expression, as he attempts to match clothes and bodies, is a treat to watch. By the end, his passion inspires, and we are rooting for the collection to be successful.

The film’s hip and modern music is a welcome beat to Simons’ romantic vision for fashion’s future. Although it may seem a tad slow in the beginning, the pace is deliberately steady and picks up your attention as the feature rolls on. Dior and I is a good film and very close to being spectacular, although it doesn’t quite reach it because it doesn’t take too many risks. Like the documentary Man on Wire, the man’s passion and drive for his art is the emotional fulcrum of the film. Dior and I may not have the thrills, but it’s a well-crafted take on the creative heir of one of the most prestigious names in fashion.