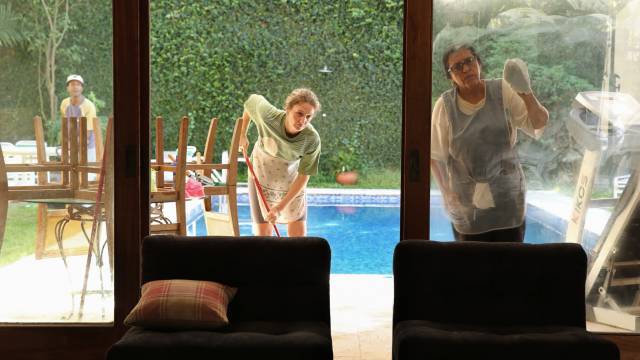 In the fine drama The Second Mother director Anna Muylaert touches on Brazil’s social class issues by focusing on Val (Regina Casé) a woman who left her daughter Jessica under her grandparents’ care as she pursued a job as a maid in a rich household in Sao Paulo. In the house of the wealthy but emotionally distant Barbara (Karine Teles), Val becomes a surrogate mother for her son Fabinho (Michel Joelsas) who shows her all the affection he can’t show his biological mother. More than a decade after she left, Val receives a call from Jessica (Camila Márdila) who tells her she wishes to attend college in Sao Paulo and needs to stay with her during the examination process. Val must then learn how to deal with Jessica’s views on class and position, which are extremely different from her own. Bringing up issues of self-worth, embedded colonialist traditions and the essence of what makes a family, Muylaert delivers a bittersweet essay anchored by exemplary performances.

After a successful run in world renowned festivals like Berlin and Sundance, The Second Mother will make its commercial debut on August 28th. We talked to Ms. Muylaert about the uniquely Brazilian elements of her film, working with famous television star Casé and her take on being a female director in a predominantly male medium.

I want to start by asking how you chose “Aguas de Marco” to play during the party scene in the film? The song by Antonio Carlos Jobim seems to be the perfect example of what people perceive as “Brazil”, in terms of things that are exported, and also beloved by people in the country. I can see how this song could be loved by by Val and Barbara, regardless of their education and upbringing.

I’m glad you brought that up, because we had lots of discussions as to what song to use in that scene, Jobim is one of our greatest composers and this song is one of the best Brazil ever did, not only for export but also for us. It tells about nature in Brazil, it’s very delicate and is also well known outside the country. With this song we wanted to show the paradox and contradictions, how there are people making beautiful music but not behaving well. We wanted to create this shock, to show two different ways of doing things in the scene. But Jobim is unique, people love him in Brazil! He’s not like Sergio Mendes who has shows in the States, but in Brazil no one cares about him (laughs).

Were you rigid with your screenplay or did you allow your actors to improvise?

I’m confident in the structure of the script so I don’t change it, but when we come to words, the way the characters express themselves I allow them to co-create with me. We do lots of improvisation, they create together. Regina is especially talented, so the script was a base for her to fly higher and higher.

When you have someone who’s as popular as Regina are you afraid that she might steal attention from the screenplay?

Some people don’t like Regina, she’s a political person, but I’ve heard of many people who go to the film and tell me they thought she was going to ruin the film. They recognize her, she has a different accent than she usually does, so in the beginning people who don’t expect her to be good, are shocked! Even those who don't like the idea of her, forget she’s her after five minutes.

In the film we see how Brazil like many other countries in the continent are practically run by mothers, even though the system itself is very chauvinistic. These women raise the men who then seem to completely forget them and continue to perpetuate macho culture.

I’m understanding people say history has been written by the powerful and winners, also by men. If a man tried to make this film he’d put it different, I’m a woman who raised kids alone and you’re right, the work of raising kids is 99% in the hands of women, but I didn’t even think of that when I wrote the screenplay. It’s so internalized, that men don’t participate, being a woman makes me think different, but this film isn’t for women, it’s for Brazilians.

Was raising the money to make the film hard because it was a film made by a woman about a woman?

Raising money is always hard, in this case they thought Regina’s fame would help her raise money, but it was not more difficult because I was a woman. As the film has been successful, and released in more countries I feel the machismo though, it’s like I stepped in a ground I wasn’t supposed to, they’re all going  “you’re so cute for making your films”, I’m shocked.

In Durval Records you touched on similar grounds when it comes to surrogate mothers...

Durval is a mother that ties the son too much, Val doesn’t take care of the daughter...but I end up writing all these mothers unconsciously (laughs) I’m tired of mothers. In my next movie there is only one mother, and it’s story of a teenager who grew up with a mother until the police arrive one day and they say he might not be his mom’s son, that he was stolen, so he has to change his identity. I guess my stories come down the same path.

The fact that Durval and Val almost share the same name made me think of your admiration for Freud as well...

I loved him when I was a teenager, he helped me discover the things you do and you don’t wanna do. My name is “Ana” but I added the second “n”, because of Anna Freud. I’m his daughter. He’s very important to all of us, I don’t think of him too much, but he’s always there.

You co-wrote The Year My Parents Went on Vacation which starred a very young Michel Joelsas, how was it to reunite with him as a teenager to work in The Second Mother?

Originally I wasn't thinking about him, but the actress who plays his mother looks like him, so we brought him back. It’s good that we have this long relationship, I’m a Taurus, I like to repeat people, the actor who plays Doctor Carlos (Lourenco Mutarelli) I’ve invited to be in all my films.

If it works! If it doesn’t I’m a witch, I will never call again. If they hurt me I never see them again, I’m a good mother.

In The Second Mother you balance genres so well, do you feel the film is more of a drama or a comedy?

To me it’s a drama, I tune to the actors, Regina is a comedian so I knew she would do something funny. I like the Coen brothers and how they mix comedy and drama in the same path. Even Wes Anderson and Woody Allen, that’s what I like and what I look for when I’m working. Jarmusch too, he gets life.

The Second Mother opens in theaters on August 28.