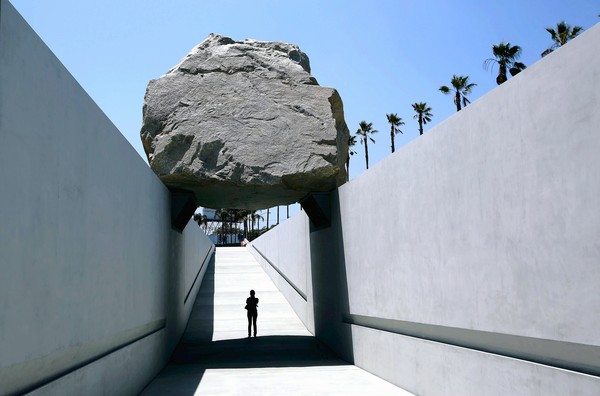 In 2011, artist Michael Heizer received a call from a quarry in the Jurupa Valley letting him know they had found his rock. For decades, Heizer had been planning an art project that would have a massive rock suspended over a man-made canyon, but technology hadn’t allowed for his vision to materialize, until then. With the help of Michael Govan of the Los Angeles County Museum of Art, Heizer was able to raise the $10 million needed to move the boulder from the quarry to LACMA’s backyard where it would find its permanent home. In his documentary “Levitated Mass: The Story of Michael Heizer's Monolithic Sculpture”, director Doug Pray chronicles that journey.

As with anything related to modern art, the film itself could serve as a parody given that it’s quite literally a movie about the travels of a rock, but those willing to see beyond the cynicism that often prevents them from embracing what they choose not to understand, will find a remarkable work that chronicles the process of creation, from imagining to execution. The reclusive Heizer doesn’t even appear until the end of the film, but it’s the power of his ideas that propels Pray’s motion picture. The undeniable scope of his work is compared by him to the works of Olmecs and Aztecs and as such, makes for a fascinating study of American artists’ need to carve a place for themselves within the much vaster catalogue of world art.

The rock’s journey also shows us the way in which bureaucracy has an effect on artists’ intentions (who would’ve thought moving a rock would require months of planning and involve governments from 22 cities!) while displaying the way in which our access to information changes how we perceive art. The rock becomes an object of cult and celebration, and the director cleverly captures the way in which a popular cultural event comes to signify many different things to many different people filtering it through their own worldview. Signs that say “Occupy the Rock!” to rock festivals and even Christians who were sure this was the rock of salvation mentioned in the Bible, all come together in similar spaces and under similar circumstances.

Heizer never expected the rock’s journey to be as powerful as the finished piece (which seems somewhat underwhelming) but in realizing this, he is forced to come to terms with the fact that whether they like it or not, once their pieces are revealed to the public, artists are no longer the owners of their work.