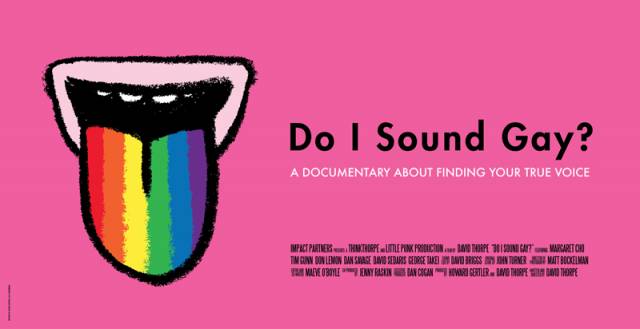 Do I Sound Gay is a fascinating foray into the linguistics of “gay intonation” and its cultural implications. After going through a break-up with a long-time boyfriend, director and subject David Thorpe takes a trip to Fire Island and begins to feel lost and insecure about his “gay voice.” In an eerie interlude of flamboyant Fire Island stereotypes in donkey masks, Thorpe likens the verbal habit to the sound of braying asses. And turns out, a lot of gay men feel the same way. “So, why do we do it?” is the question, “where does it come from?”

Thorpe looks deep into his history, his friendships, and the greater gay community for an answer. The film walks the line between touching story of personal exploration and anthropological study, and it merits from both. While the premise of Do I Sound Gay appears to run the risk of turning into one of those “pray the gay away” experiments, it ends up being more of a journey to acceptance for Thorpe. He goes through several methods of change including working with numerous voice coaches, for whom he spends hours upon hours practicing shorter vowels and a more masculine “down speak.” These moments of effort may be motivated by a certain self hatred but it doesn’t take long before Thorpe finds that he hates the idea of changing himself for others even more. His witty commentary and charming self awareness throughout the whole experience add a wonderful lightness and personality to the film.

On the side of anthropological study, the film is lively in a different way. Several experts speak on the topic. One linguist explains that the habit has more to do with who we spent time with as a child than the observance of greater social patterns. Thorpe, for example, spent a lot of time around his mother and may have picked up her light, questioning, conversational leanings early on. Each “expert” illuminates a different facet of the subject and perhaps no interview is more touching than that with very open, gay writer, David Sedaris.

Sedaris frequently reads his stories on the radio and at events, and his high pitched, nasal, timbre has become almost a part of his brand; the other, more important, part of his brand being the exacting wit and obstinate sarcasm with which he approaches each and every subject. For that reason, watching Sedaris speak earnestly about his own conflicts with sexuality and voice is especially moving.

After many months of practicing, Thorpe achieves very little audible change, but the emotional distance he covers is impressive. While the message is ultimately a cliché, “you’re beautiful just the way you are,” the process through which the film goes to get there is well worth the cheese. Do I Sound Gay is a delightful and informative film that will leave you feeling fuzzy, and maybe a little more aware of your speech patterns.