After meeting two cute guys at a rooftop party, BFFs Harper (Bridey Elliott) and Allie (Clare McNulty) decide they will go with them to the beach the following day. Allie is supposed to complete her Peace Corps paperwork, and Harper should be trying to find a job, but they choose to put their responsibilities aside in the name of some harmless summer fun. Written and directed by Sarah-Violet Bliss and Charles Rogers Fort Tilden is an insightful snapshot of the lives of millennials, and a vibrant dissection of life in New York City complete with commentary on social stratification and class, delivered in the light spirit of a 90s teen comedy.

At the center of the film are the two exemplary performances of its leading ladies who bring genius comedic timing and heartfelt emotion to their characters. They turn Harper and Allie into two young women trying to carve their place in a world that has only suggested they follow pre-ordained paths, and for all the fun found in the movie, by the end its melancholy by far outweighs its comedy. We had a chance to sit down with Elliott and McNulty who talked about making their feature length debut, summer nostalgia and the importance of stories with female protagonists.

I thought that Orion Pictures was no more, so I have to confess that I got giddy about Fort Tilden from the second I saw the studio logo appear because it reminded me of so many films I loved growing up…

...and then the movie itself has this very retro feel to it as well. Can you talk about this throwback aesthetic?

Bridey Elliott: This is the first Orion movie in a very long time, this is their reboot movie in a way. They’re a branch of MGM but they haven’t been releasing movies in a while. I feel the same way in the sense of nostalgia for Orion.

Clare McNulty: I might be a little bit out of my league here, but I feel that the colors in the film feel like 80s or 90s. It’s light, out in the summer and something about the color feels nostalgic.

Bridey Elliott: Also the directors love movies like Clueless so the tone of the movie follows this generation’s own bratty people. In Clueless it was the Valley girls, and in this one it’s Brooklyn millennials. 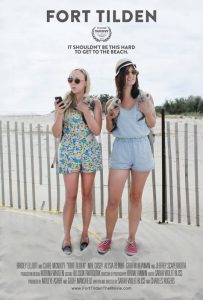 Did the filmmakers give you any homework, as in movies or books they’d be referencing? I saw nods to many New Wave films and also some Beckett, something like Waiting for Godot. Will these characters ever make it to the beach?

Clare McNulty: The writers have background in theatre, improv and film, we all do actually. Sarah-Violet wrote a lot of plays in college, so I can definitely see the Waiting for Godot reference, I actually felt that while it was happening. There would be lots of times when we would be shooting and I wondered when are we going to get to the beach?

Bridey Elliott:Yeah, the journey was so fun, uncomfortable because it was guerrilla filmmaking and there wasn’t always a bathroom on hand, so there was a lot of waiting to use the toilet or the grass.

That’s New York in general though.

Clare McNulty: This was a heightened version of New York!

Bridey Elliott:All the inconveniences added a genuineness to the process.

Let me get existential for a moment. The film is very cyclical, it basically ends where it begins and it made me wonder if the process of shooting a film that takes place during a single day got to be very Groundhog Day-like in any way?

Both in unison: Yeah!

Clare McNulty: It’s interesting because pretty much everything was shot in sequence except for the very last scene which was shot earlier, because we needed to shoot the interior scenes at the beginning. So we shot the first and last scenes in the first block of time. I don’t know how that affected it, but it was interesting to get in that mindset at the beginning and then explore it throughout the process.

Bridey Elliott: We shot the final scene at three in the morning, so our exhaustion added to it. The rompers that we were wearing didn’t get washed at all during the process, so they felt grody and it added to the experience.

Clare McNulty: : It was all about surviving each day.

Bridey Elliott: We also didn’t know each other before, we met only briefly before shooting and we jumped into this as the characters, not that we were assholes to each other (laughs).

Clare, you knew Sarah-Violet so your character was written in your voice, but I’m curious as to how much space the screenplay allowed you to play with your characters? Was the process very rigid or did you have the chance to do some improv?

Clare McNulty: They were actually writing in both our voices a little bit, the more they got to know Bridey the more they wrote in her voice. The script was very tight and there was room for improvisation but we mostly stuck to the script. The movie is filled with improvisers like Neil Casey, so there was definitely room for them to do their thing.

Bridey Elliott: The banter between us is real rhythmic, Charles and Sarah-Violet were really good at writing these vapid conversations that blow your mind very fast. As things got more chaotic for our characters we had the chance to do more improv, but the writing is so good that other than some improv we we made sure to memorize everything.

People keep making reference to how dislikable these characters are, so I wondered if when you read the screenplay you liked the characters yourselves? More importantly, do you even need to like your character in order to play them?

Clare McNulty: I liked both characters when I read it, one of the wonderful things about how Sarah-Violet and Charles write is that they allow a lot of different emotions to coexist. You’re allowed to like them and also dislike them, to root for them and also to want them to be punished. Just the way that things are in real life, so reading the screenplay it was easy to tap into it cause I was like “I feel you girl”.

Bridey Elliott: Judgment did not enter my brain. The screenplay was funny to read and it was a pleasure to act in.

Also, can we talk about how unfair it is that “dislikable” is mostly used as an adjective in films about women? In films with male leads, they can be assholes and jerks but critics and audiences forgive them and say “oh, they’re growing up” or “learning”. I kept thinking how that kid from Boyhood who was such a jerk, but he was so beloved, while we see the characters in Girls for instance be accused of being selfish or entitled.

Bridey Elliott: It’s inherently sexist to try to categorize or clump together one voice. There’s been interviews where we’ve been asked if it’s fair to compare us to Lena Dunham or Broad City, and it’s fair as in that comedy is something we can do…(laughs)

Bridey Elliott: But the similarities are only that they’re women, it’s a comedy, in New York and they’re young...but are you gonna say that about every movie about a sports team? Are they all the same? You never hear that.

Clare McNulty: Yeah, they’ll say it’s a hero’s quest, if you have a movie about a white straight male going for something and making it through the end, they call it an odyssey. But with a movie like ours, it’s just a movie about unlikable characters.

Bridey Elliott: We get asked how we’re different all the time. It’s like they’re waiting for this singular voice that they can put a blanket on everything, so that can be done and put to rest, so we don’t have to see these women anymore. It’s weird.

Clare McNulty: This is just me rambling right now, but I’m wondering if people just don’t like to see women have redemption? In those male movies, people are rooting for these characters…

I’m also angry today because over the weekend I saw Gypsy and Grey Gardens both of which are tales about women who were forced to live on the margins of society just because of their gender. I’m in a very self-loathing “damn us all with penises” mood...

...but anyway, every time there are shows or movies with women at the center, people will try to pretend the previous one never happened, like for instance Girls was said to be the new Sex and the City, as if all these things can’t coexist.

Clare McNulty: True, why can’t these things all be considered part of a canon?