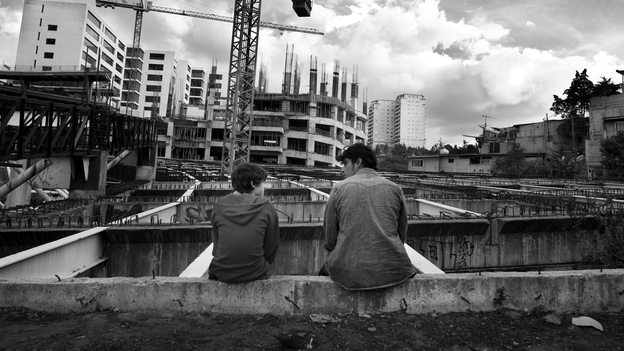 Shot in black and white, the debut feature from Alonso Ruizpalacio marks the arrival of a fresh new voice in world cinema. With jaunty camera Güeros captures a period of social unrest in Mexican history, while simultaneously composing a bittersweet love letter to Mexico City. In 1999, the National University ended its free tuition policy to the dismay of many students who staged protests. In Güeros, a fictional tale, while most camp out at school on strike, Sombra (Tenoch Huertas) and Santos (Leonardo Ortizgris) bum around their shoddy apartment, rife with onions, but devoid of electricity. Their lives are in disarray, so is Mexico City. “Why go if we’re going to end up here again,” one of them quips. Their slacker  routine is disturbed by the arrival of Sombra’s younger brother Tomás (Sebastián Aguirre), swiftly exiled by his mother after a reckless prank.  He cramps their style like cousin Eva in Stranger than Paradise without the sexual tension, and totes around a cassette of unsung Mexican musician Epigmenio Cruz, a nostalgic totem left by the boys' father.

Jarmusch’s influence extends to the visual as Ruizpalacios digs up the droll in humdrum details (a pulley system fetches a very long extension cord for electricity from the downstairs neighbor) against minimalist scenery. News of Cruz’s hospitalization and threats from the neighbor (he finally caught them) spur the trio on a journey to pay last respects to the folk musician, whose jams rumor has it brought Bob Dylan to tears.  Too bad viewers aren’t privileged enough to hear them. The track cuts to silence each time a character is crowned with headphones, as if exempting us from one of Mexico’s overlooked voices. Or it’s simply light filmic joshing, a nudge in the ribs from Ruizpalacio, whose lyrical tone pays clear deference to the nouvelle vague.

The film’s latter half forges itself as a road movie confined to a submarine-like sedan, hampering outside views. Not a problem though; a welcome Macguffin, Cruz allows exploration of the city and its residents, including a pit stop at the university to pick up a fourth passenger and love interest, Ana (Ilse Salas) who flees as factions rise up among the protestors. All the while, those that Sombra and co. encounter make a crack at the complexion disparity between the two brothers. Tomás is nearly wan, Sombra much darker (his nickname translates to shade.) Evocations about skin tone and identity don’t stop there. The film’s title is slang term for a lighter skinned person. ‘Gueros’ and its diminutive ‘gueritos’ pepper the film. It is lobbed as an insult by street thug and highbrow party guest alike, each time rejected by the protagonists.

The existential crisis takes its toll on Sombra, plagued by panic attacks, conveyed by a dreamy, dandelion-like scatter of downy feathers, beautifully shot in semi-slowmo. Ruizpalacios uses the camera to reflect unrest, this is the rare film where all formal choices hold meaning. Draining the color in service of the disillusioned youth may initially seem detrimental to the depiction of Mexico, but the gorgeous and striking cinematography emits its own radiance, capturing every gradient of silver.